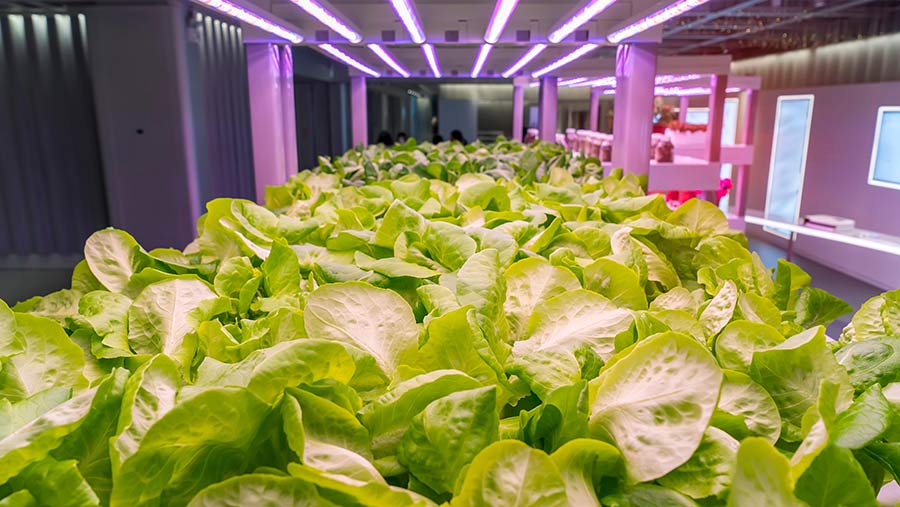 Being able to produce crops 365 days a year, without the need for pesticides or much human intervention, while being unaffected by the weather, will appeal to many growers after such a prolonged, wet autumn.

Vertical farming – sometimes called indoor farming – is the practice of growing plants under fully controlled conditions in buildings in many stacked layers, without solar light.

Unlike glasshouse production, which relies on sunlight, it makes use of LED lighting to provide different wavelengths of light, according to crop and growth stage need.

Together with soil-less growing techniques and environmental control systems, vertical farming is a specialist business.

Vertical farming – what is it?

The practice of growing crops in stacked layers, vertical farming often incorporates controlled environment agriculture and can be housed in buildings, shipping containers, underground tunnels and even abandoned mine shafts.

Vertical farms use soil-free growing techniques and stack crops in specially designed beds and trays, making use of artificial lighting and climate control to get the desired results.

During the growing process, four elements are controlled – lighting, irrigation, fertigation and climate.

And it’s a fast-growing sector. Worldwide, it was worth £1.72bn in 2018, with experts predicting that will rise to £9.84bn by 2026. Japan and the US are leading the way, but other countries are catching on.

Enthusiasts say that vertical farming offers a means of guaranteeing yields and reducing the industry’s environmental impact, while improving the supply of safe, healthy and nutritious food and minimising the miles involved in its distribution.

Their vision – locally grown, quick-to-market fruit and vegetables, produced in the neighbourhood where it is consumed, with the traceability and integrity that food supply chains demand – is already being delivered by various facilities worldwide.

These high-tech units are presented as the solution to many of the challenges facing traditional production methods, such as pollution and water use – even if they are currently limited to higher- or added-value crops in order to be profitable.

As they spring up around the world, they are also seen as a means of reducing reliance on food imports.

The use of automation and robotics to keep human intervention and labour costs to a minimum is attracting interest, while less food waste and making better use of limited land space are bonus features too.

In the UK, there have been several big projects announced in the last 12 months. Edinburgh-based Shockingly Fresh has ambitions to develop 40 sites and already has five on the go – one in Scotland and four in England.

Ocado is involved too, having invested £17m in the sector during 2019. That has seen it enter a joint venture with 32ha, a US firm, and Priva Holdings in the Netherlands, known as Infinite Acres.

It has also taken a 58% stake in Jones Food Company, a Lincolnshire-based business producing 420t of leafy greens each year at a facility of 5,120sq m – equivalent in size to 26 tennis courts.

In London, there is Growing Underground, which produces micro greens and salad leaves below the busy streets of Clapham, while in Bristol there is LettUs Grow, which provides the cutting edge technology required.

According to Leo Marcelis of Wageningen University, the vertical farming industry received a kick start from advances in the performance of LED lighting, which can be used to provide the type of light that different plant species need at a much better price than the previously used high-pressure sodium lamps.

“This is the most interesting bit,” he says. “LED lights, which are essential for replicating natural daylight, can be used to change the way plants grow, when they flower and how they taste. It’s all about varying the spectrum used at different growth stages.”

LED lights have other advantages, he notes. “They can be positioned between plants and layers, produce hardly any heat radiation and are more energy efficient.”

Asked whether vertical farming is sustainable, Prof Marcelis says that the current bottleneck is energy use.

“It meets so many requirements, such as much lower water and nutrient use, but it is energy intensive. Of course, that is improving all the time, especially with lower-cost LED lighting and other technical developments.”

Vertical farming is capital intensive too. Plenty of start-up funding is required, with pay-back times depending on the unit’s operational efficiency and chosen retail route. While some have failed, others are finally starting to make small profits. 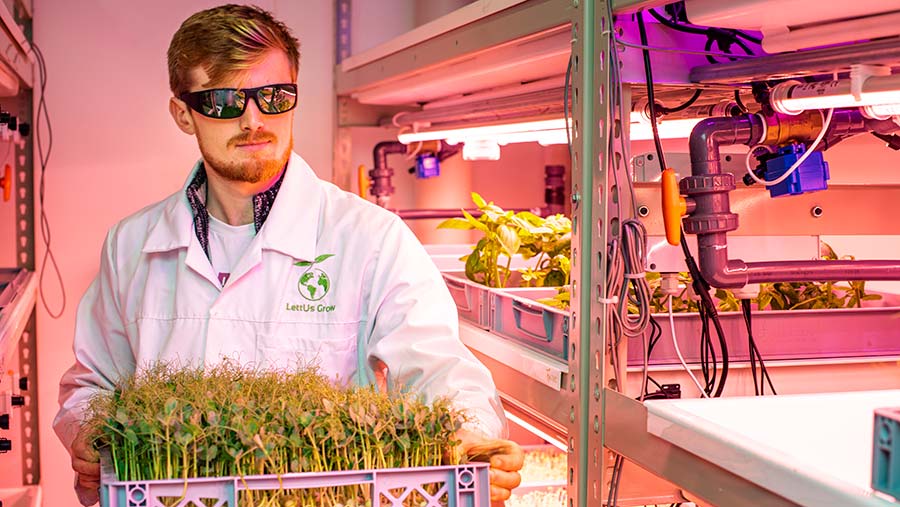 Extreme weather events and consumer demand for freshness are the two reasons LettUs Grow’s co-founder Charlie Guy (pictured) cites as being behind the current interest in vertical farming.

In addition, being able to get consistent yields and produce quality for 12 months of the year, with the traceability and integrity that supply chains require, is opening up market opportunities for both existing growers and entrepreneurs, he says.

“Whether it’s a very cold spell, such as the Beast from the East, or a lengthy summer drought bringing water shortages, the frequency of extreme weather events is increasing. This has a cost to both growers and consumers.”

Diversification
His Bristol-based company designs the hardware and software needs for indoor growing facilities and is seeing interest from traditional producers, who are looking at an indoor system as a diversification project.

“For existing growers, they can add a valuable revenue stream,” he says. “They are predictable and scaleable, offer year-round production and tend to fit in well with existing projects such as renewable energy and anaerobic digesters.”

Technology
The LettUs Grow concept is based on aeroponics and a technology platform known as Ostara. Aeroponics give better growth rates than hydroponics, he claims, while using up to 95% less water than conventional agriculture.

“Aeroponics puts more oxygen in the root zone, which is why the plants perform better.”

Mr Guy explains it that does the data capture and automated control of the growing environment, bringing the food safety and traceability that’s needed, but also offering the potential to use sensors and robotic technology.

“That’s important, because energy and labour should be the two key areas of focus with any vertical farming project,” he says. “They have the final say on profitability.”

Vertical farming is not just about lettuce, he stresses. “Although the focus has been on high-value herbs and pea shoots, there are around 60 different crops that can be grown in this way.

“The key to choosing what’s right for you is to look at what access you have to various markets, rather than opting for the fashionable crops.”

Hydroponics or aeroponics?
Both hydroponics and aeroponics deal with plants without the traditional growing medium of soil.

How the plants’ roots are situated in the systems determines the way in which they receive nutrients.

In hydroponic systems, the roots are submerged in water and nutrients are delivered in the water.

In aeroponics, the roots are exposed and sprayed with a mist containing water and nutrients, resulting in a humid, fog-like environment.