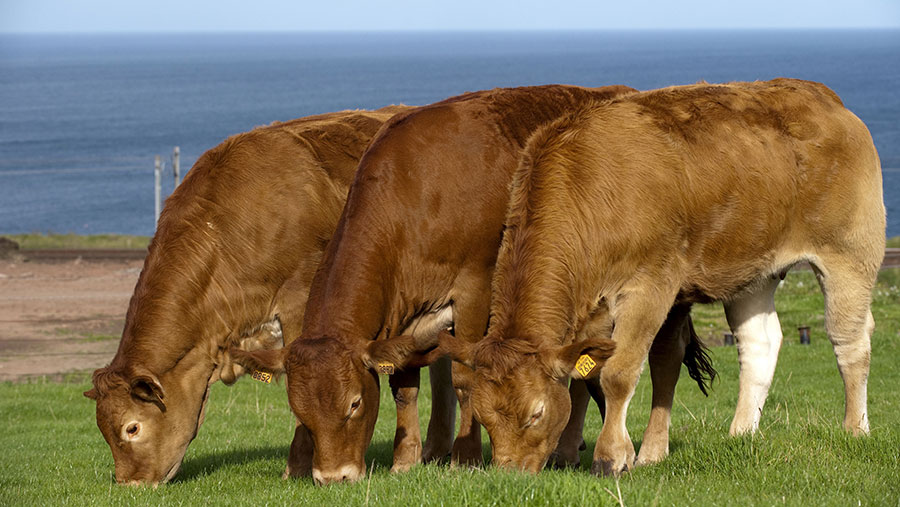 Beef farmers from across Scotland gathered at Thainstone Mart on Monday evening (30 September) to vent their frustration at persistently low prices.

They sat until their buttocks went numb on plastic seats in Ring 2, and still they rained down questions and statements about the dire state of the market on a panel of NFU Scotland officeholders, supply chain representatives and levy board staff.

The targets of their ire were numerous – processors, consumers, the mainstream media, government, schoolteachers, the levy board…

Even support programmes were criticised, with the labelling of the Beef Efficiency Scheme as “inefficient” earning a particularly loud round of applause.

But if one single word can define the mood among most in the room – it was “helpless”.

Helpless as changing dietary trends turn customers away from higher-priced cuts of some of the best beef in the world.

Helpless as the processors shrug apologetically for another week without a price increase, pointing to a beef market in plentiful supply.

Helpless as the humble cow is held up by some as a symbol of environmental destruction, and farmers’ rightly held status as custodians of the countryside is diminished.

Helpless that, despite the fact they continue to sell some of the most expensive beef in the world, they are losing money with some of the highest costs.

Some called for another cash injection from government, as stories were relayed of herds on the brink of sale.  And the same sentiments were expressed at other beef crisis meetings held in Wales and Northern Ireland in recent days.

As a champion of all things rural, Farmers Weekly views the loss of almost any farm business as a tragedy, and government support for farming in some form is always likely to be needed.

But all heavily subsidised sectors – and beef in particular – have to acknowledge that the status quo isn’t working.

Producers are supplying a product that consumers don’t adequately value, in quantities they don’t want. Meanwhile, less-supported sectors such as pork and chicken are taking market share by being cheaper, more consistent and more versatile.

Beef farmers have an unpleasant choice.

Option 1: Go to war with other meat-producing sectors with a multi-year, multimillion-pound marketing campaign and attempt to take that market share back.

Option 2: Accept that not every straw-and-concentrate-buying, six-month-wintering, 20-month-old slaughtering system is going to make it, and that big suckler cows are looking like an increasingly unaffordable luxury.

It seems by default we are currently heading towards option 2.

Yes, many supermarkets have made welcome commitments to sourcing only UK beef for their meat counters. But we all know cheaper imports make their way into ready meals and the restaurant trade.

And with exports needed to sell the parts we don’t eat, a “fortress Britain” tariff structure to prevent imports is likely to cause as many problems as it solves.

Just as with lamb, big buyers will always wish to source a portion of beef from overseas to make sure they are not caught out by market volatility.

With cheaper beef available from overseas and the supply of dairy beef only likely to rise at home, unless high-cost systems can find a marketing niche that a customer will value, then the sums just don’t add up.

The regrettable truth is that, only if some producers who are unwilling or unable to produce cattle the customer wants exit the sector, will the rest who can adapt be able to survive.