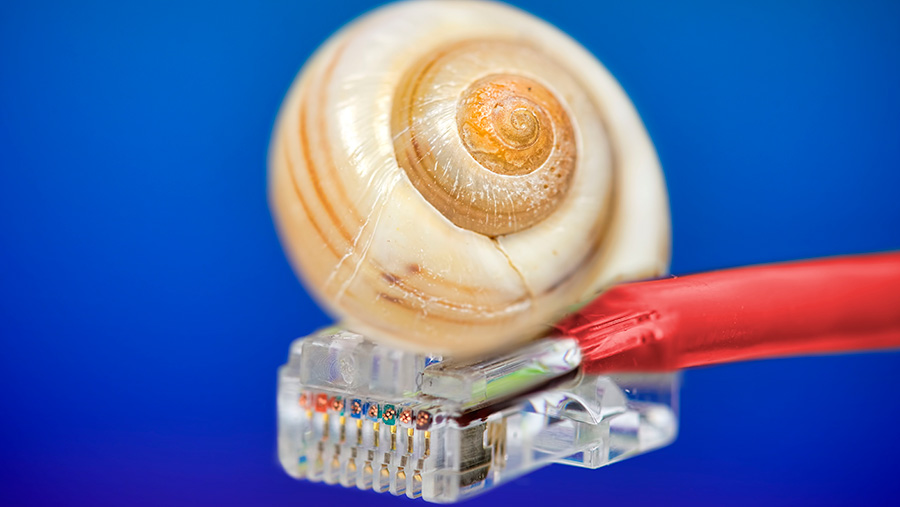 Have you ever had to report a broadband fault to BT Openreach?

I can assure you that it’s not an enjoyable experience. In fact, I would go so far as to compare it to root canal treatment. It goes a little something like this:

After listening to a bewildering number of options from a recorded voice down the line, and then waiting on hold for 20-30 minutes (all the while thinking of jobs outside you should be doing), you’ll eventually get the great privilege of talking to an actual human being.

See also: What farmers need to know about the new telecoms code

You’ll then calmly report that your broadband is down for the fifteenth time that month. The operator will ask you if you’ve turned the router on and off, and that’s when you will start, despite your best efforts, to get mildly irritated.

You’ll confirm that you have indeed had the foresight to do this, yet the light on the router is still flashing.

They’ll reply with words along the lines of: “Oh dear, let’s have a look at it then, shall we?”, and before you can protest, you’ll be put on hold once more while they conduct a series of line tests.

Eventually they will come back to report that there is no fault on the line, and everything looks in order, so they will request an engineer visit to assess the situation.

You’ll explain carefully that this has happened several times already over the past few months, and can the engineer they send please this time be able to check the phone lines.

You see, the last one that turned up was only qualified to check internal fittings, and you are sure the problem is on the lines outside somewhere.

They will reply cheerfully in the affirmative, and three days without broadband later, an engineer only qualified to check internal fittings will duly arrive in your yard.

You’ll call BT Openreach again, go through the interminable on-hold process once more, and then speak to a different operator to last time. You’ll explain the situation from the beginning, and they’ll murmur sympathetic apologies to you while arranging for an external engineer to visit the property this time.

In the meantime, three more broadband-less days will pass, your children will be ridiculously grumpy and your wife will be increasingly irritable, before finally an external engineer will arrive, diagnose the problem, fix it and have you online and in the 21st century again.

Until the next time. Because there is always a next time. The Welsh borders where I live are notoriously bad for slow broadband speeds and faults.

It took us two days to complete our 2017 BPS application, when it shouldn’t have taken more than two hours, as the connection kept crashing. We had 17 BT engineer visits in eight months last year.

Defra secretary Michael Gove, in his speech at the NFU conference, highlighted poor rural connectivity as a huge problem, and made all the right noises about remedying the situation.

Of course, it’s not the government’s fault, he maintained, but EU rules on state aid that are to blame.

At least now, due to Brexit, universal superfast broadband and 4G coverage for all will arrive quicker than you can say “public money for public goods”.

I will endeavour to remind myself of this the next time I’m waiting on hold to BT.