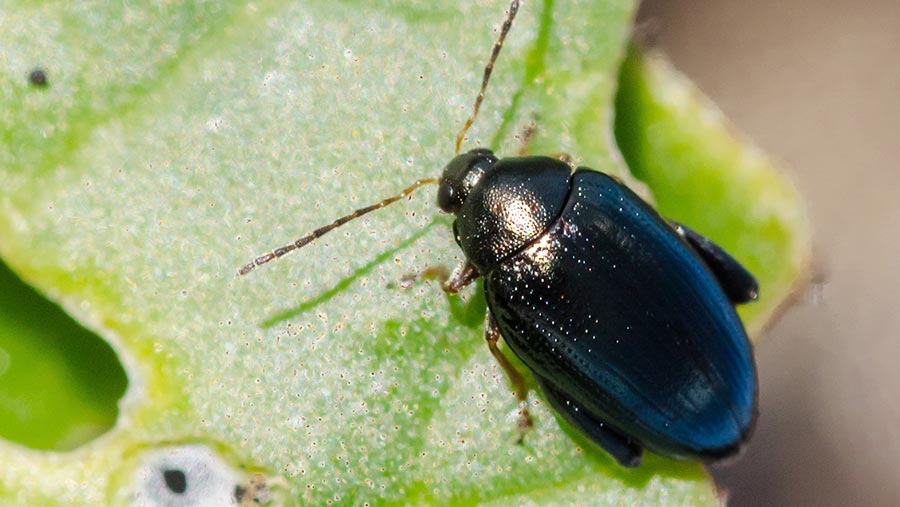 The obvious temptation this week is to write about the weather, the Rugby World Cup or politics.

The problem is, as this is being written 10 days before you read it, the unexpected might have already happened – it might have stopped raining, sanity may have descended on Westminster and Scotland might have won a game.

See also: History reveals the folly of dependence on imports

As Harold Macmillan famously said about the unpredictability of politics, it is driven by “events, dear boy, events”. And, like pigeons on an October rape crop, it would seem there are just too many events about at the moment…

So instead, I’ll concentrate on sticking to “knowns”. To misquote that old sage, Dr Johnson: “There are just three certainties in life – death, taxes and cabbage stem flea beetle.”

As most arable farmers south of Birmingham know, it’s not a matter of if, but when your oilseed rape crop is to come under attack from the cotyledon-chomping critters.

A few years back, when the debate over neonicotinoids was at its height, some of us predicted a knee-jerk, universal ban would lead to three things – less rape being produced in the UK, less early foraging for pollen-hungry bees and more imports of rape produced from abroad, where neonics are still widely used.

At the time, the anti-pesticide lobby accused us of crying wolf. But four years later, it is clear our predictions were right.

According to AHDB figures, UK rape production has fallen from 2.54m tonnes in 2014-15, when neonics were first banned, to 1.6m tonnes this year.

But before I get accused of being addicted to chemicals (and hey, I am from Essex), let me say I accept that necessity can be the mother of invention. Banning pesticides can make farmers more inventive in seeking out non-chemical means of controlling pests.

I’ve messed around with companion crops and drill timings at home, with mixed results.

We will gift our markets to others.

You could describe it as an economic policy from the mad-house and a trade policy based on reverse-protectionism – a policy that disadvantages your own growers while encouraging imports.

And this leads me back to good old politics. At the time of writing, the current government has just published tariff schedules for the eventuality of a no-deal Brexit.

In the main, the pattern is one of lower tariffs on imports, such as eggs and wheat, in the face of higher export tariffs.

When you add to this that it is likely that those tariff-free imports will come from places where growers have lower costs of production because of lighter regulation, then farmers are right to be very worried and very angry.

Just as we’ve learned from the neonics ban, this policy will diminish UK production while increasing imports produced to lower standards.

Irrespective of whether you voted “leave” or “remain”, surely none of us voted for this.