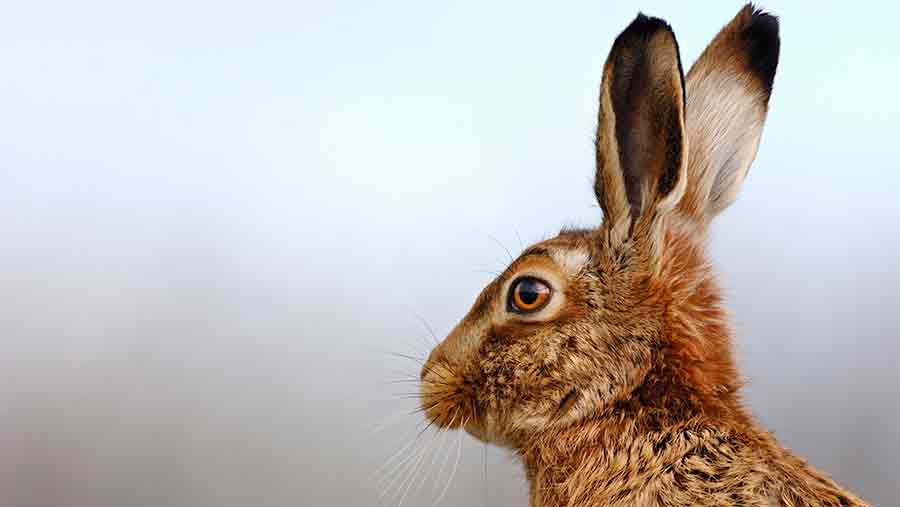 There was a strange feeling, once the combine finally got going, that there was something missing from the cab.

One evening in March, I had taken my seat in the back row of a nearby community centre, right in the corner – next to the emergency exit.

I wanted to hear a talk, organised by the Hampshire and Isle of Wight Wildlife Trust, and given by this particular lady from the Hare Preservation Trust. Not surprisingly, the talk was titled ‘The Hare’.

You can guess why I was next to the emergency exit. Strange things happen to the English when you mention a hare.

The fact that they are numerous, eat vast amount of crops and are a magnet for unsavoury types and their lurchers in stolen 4x4s gets forgotten.

The hare becomes a mystical and magical creature, rarely seen and horribly persecuted.

I suspected that in the upcoming frenzy of hare-worship, any farmers in the room might have to beat a hasty retreat.

The first half of the talk was innocuous enough, factual and interesting – nothing to suggest that, if spotted, I was likely to endure a hail of plastic chairs. After tea and biscuits, things got a bit darker, a bit less David Attenborough, a bit more Dave Spart.

The supposed perpetrators of the hares’ hideous persecution were named: farmers, shooters and huntsmen. Hang on, I thought, this meeting is in danger of going down the class war route, rather than focusing on animal welfare.

Farmers were blamed for having big fields and practicing monoculture – all the usual stuff.

The shooting fraternity were evil for their hare drives, when hundreds are shot on the big East Anglian estates.

And for the huntsmen, her mood – and language – became very worrying. The Hare Preservation Trust feels so strongly about beagling, she proudly announced, that it had donated money to the Hunts Saboteurs Association.

There was a murmur around the Badger Farm Community Centre at this news, and it wasn’t a murmur of universal approval.

I had spotted one or two familiar faces – one or two genuine country types, known to frequent the beating line – and I don’t think it was just me beginning to grow weary of being verbally assaulted.

Then it was question time. I sat quiet until the very end, at which point I put my hand up and confessed to being a farmer.

A lively shouting match took place across the full length of the room. I accused her of stunning double standards by concentrating on beagles rather than the violent hare coursers.

I said that there was only one group more unpleasant that the hare coursers, and that’s the hunt saboteurs, and she should hang her head in shame at donating to them.

And just as the row was getting too heavy, I invited her – and, indeed, all those present in to the room – to come out to my farm and see the hundreds of hares.

In fact, she was welcome to sit in my combine this harvest and watch them by the dozen. “Yes, please!” she laughed, and we were friends again.

I might have to sort out people-carrying trailers for all the members of the Hants IoW Wildlife Trust who want to come out next spring – I was suddenly very popular.

From the Hare Preservation Trust, however, I’ve heard nothing. The combine passenger seat remains empty.