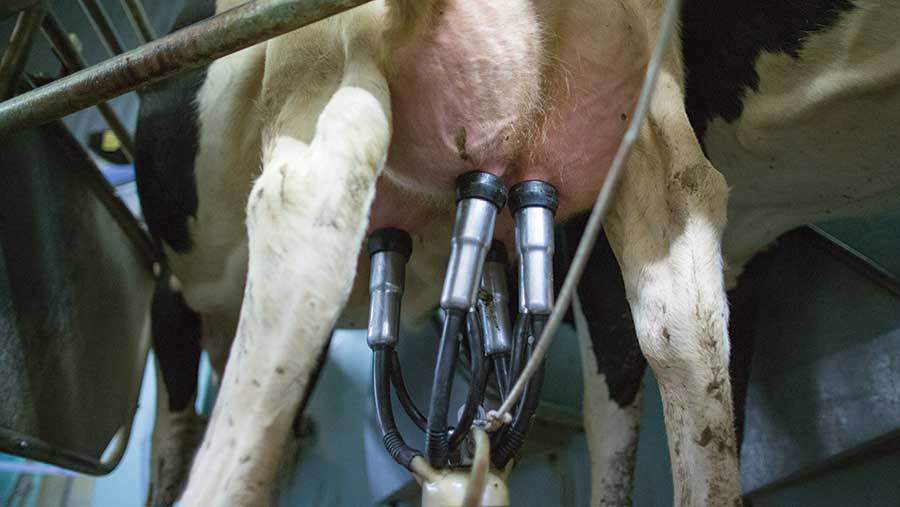 Milk prices are booming again. Multiple processors have issued price increases for October, and it seems that there may be more to come.

AMPE and MCVE have swung from an all-time low of 15.5p/litre and 15.7p/litre respectively just 16 months ago to record-breaking highs of 40.1p/litre and 38.7p/litre.

See also: Block v year-round calving: Which is best for you?

Who could have predicted that the turnaround in dairy fortunes would be so sudden?

Not me. In my July 2016 column, I wrote that milk prices wouldn’t recover for a while yet, “and certainly not to the giddy heights of 30p/litre”. Well our base price is now 30.79p/litre, so clearly I was wrong.

I also warned at the time that we needed to learn from the crash, and not allow costs to rise with the milk price during the recovery.

But best intentions aside, fuel and fertiliser prices are also skyrocketing thanks to the recent weather events in America, meaning we won’t be banking all the extra margin.

It has been reported that dairy lending was already slightly up for the year to June compared with a year ago, as farmers looked to reinvest or even expand after two years of belt-tightening.

The rollercoaster may already be picking up speed. But this seems like a risky strategy to me. Surely the safest thing to do is pay down debt rather than ramp up production, which will only hasten the next crash?

How sustainable is the recovery anyway? Butter, cream and spot markets are exceptionally high, prompting Arla chief executive Peder Tuborgh to warn in the national media that butter prices will rise sharply before Christmas, and there may even be shortages.

Analysts say the increased demand for fat is due to new research that has driven consumers away from margarine (once perceived as a healthier option), back to real butter, as well as a newfound enthusiasm for baking.

An even bigger factor could be McDonald’s decision to replace margarine in its products with real butter. The switch will require about 13 times more milk than the total annual UK production.

So, is the current demand for fat a real, long-term increase or a short-term contraction in supply due to the low prices of 2016?

The NFU accused Mr Tuborgh of scaremongering and added that the constant boom-and-bust dairy market cycle helped no-one, least of all farmers.

While I agree that these extremes of pricing make it difficult to farm consistently, for the producers who can keep their costs low enough to survive the troughs, these peaks are what make it all worthwhile, and even an opportunity to make some serious profit.

The key thing is recognising the trends and responding appropriately.

Farmers are not always best placed to do this. The AHDB provides a wealth of data, but it is mostly historic. How can we more accurately forecast what our milk income is likely to be in any given year?

Muller has developed a futures contract that will allow non-aligned suppliers to hedge up to 25% of their milk production forward at fixed prices.

It has also been reported that the European Energy Exchange and Global Dairy Trade are considering creating an auction for European dairy products, which could give British farmers a more relevant picture of prices and trends.

Both moves show that the market is developing to provide more options for farmers in response to rapidly fluctuating milk prices.

Like many others, my understanding of these mechanisms is limited. But we would all be well advised to learn more about them before the milk price nosedives again, as they are likely to become an essential part of our armour against volatility.