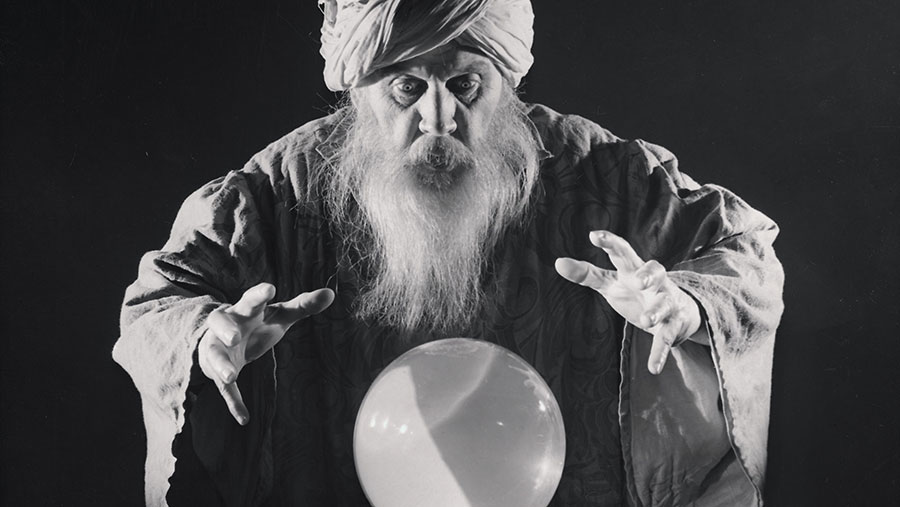 As the UK industry most vulnerable to the economic shock of Brexit, we were certainly all a bit shocked that food and farming was completely left out of Theresa May’s recent “grand industrial strategy to boost growth after Brexit”.

The only mention farming got was an old plan published in 2014 to encourage “public procurement of British food” and Defra’s long awaited “25 year food and farming plan” which, it seems, is taking 25 years to draw up.

See also: Opinion: ‘Pythonesque’ dairy sector does itself no favours

After some crystal ball gazing, I’ve come up with one (terrifying) possible outcome:

Stephen Carr farms an 800ha sheep, arable and beef farm on the South Downs near Eastbourne.

A new “British Payment System” will be introduced from 2020 to replace the current “Basic Payment Scheme”.

The two subsidies create the same “BPS” acronym and Andrea “all farm subsidies must be abolished” Leadsom is confident farmers will “not notice the difference”.

But she may be mistaken about that because while the EU BPS  pays farmers about £250/ha annually, the UK BPS will pay farmers nothing at all.

An important part of the UK’s food and farming plan will be “greening” whereby UK farmers will receive regular updates about how subsidies and tariff protection within the EU are continuing unabated.

This will have the effect of turning UK farmers “green with envy”.

See also: Opinion – This year I will Brexit-proof my farm

As part of the government’s much-vaunted promise to rid the UK of the much-hated EU three-crop rule (whereby farmers have to grow at least three crops to qualify for generous EU farm subsidies) the UK will introduce a new no-crop rule.

This rule will mean if the government receives information a crop is being grown somewhere within the UK action will immediately be taken to make the growing of that crop completely uneconomic.

This will be done by quickly making a new trade agreement with a very-low-cost-producing country somewhere in the world so the crop can be imported at rock-bottom prices.

The government hopes this will quickly bankrupt any British farmer still silly enough to try and produce anything post-Brexit.

With the no-crop rule in place the government is therefore confident that by 2021 wildlife and bio-diversity will increase as wildlife is left in peace to enjoy a British countryside devoid of any farming activity.

British farmers have come to resent the fact that to qualify for EU farm subsidies they have had to comply with numerous environmental regulations such as not cutting farm hedges before a particular date or not engaging in any farming activity that caused soil erosion or the poaching of their fields by livestock.

Under the “25-year strategy”, all of these environmental restrictions are to remain in place post Brexit.

The only difference will be farmers will simply be fined for any breaches rather than having their subsidy payments reduced.

Hence this will be known as very cross compliance as farmers will be furious they face exactly the same array of environmental restrictions on their farming activity as when they were when in the EU but will now receive no subsidy reward for observing the regulations.

Long mooted as part of CAP reform but never implemented, the idea was subsidy payments should be “capped” so no farmer could receive more than, say, £100,000/year in EU subsidy payments.

Without any payments being made to farmers “capping” will no longer be an issue.

But this does not mean capping will disappear from the farming lexicon. Under Defra’s food and farming strategy capping will be the term for the practice of stopping one’s car to place a charitable donation in the outstretched “cap” of destitute farmers standing by the roadside.

No doubt the two-thirds of farmers who voted for Brexit will welcome Defra’s post-Brexit initiatives with open arms.