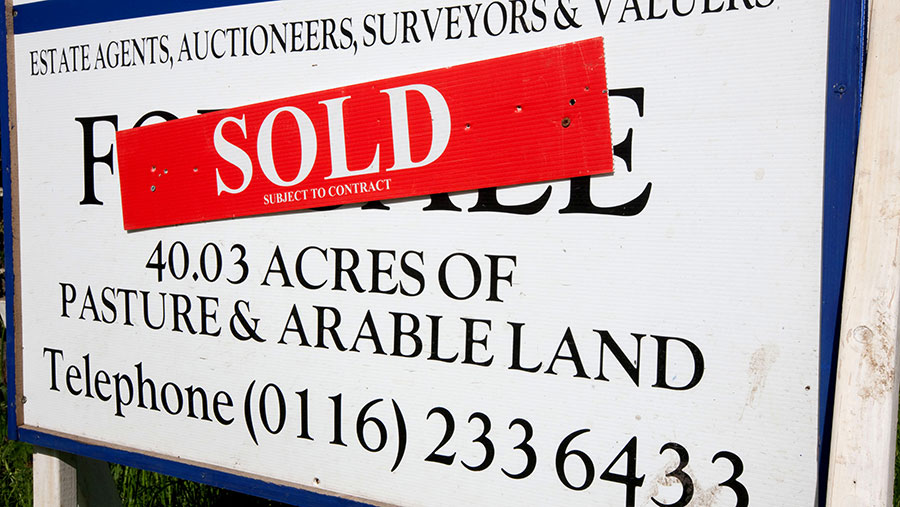 I prefer to leave predictions to the “professionals” – like those pollsters who forecast victories for Remain in the UK in/out referendum.

But, such is my confidence on this particular topic that I’m going to stick my neck out: there is about to be a very sizeable fall in the average value of UK farmland.

So far those masters of self-interested optimism – land agents – have only conceded that the land market is “pausing for breath” while foreign investors realise what a bargain UK farmland has become in the light of sterling’s 20% devaluation.

Others suggest a minor price correction over recent months (about 3%) as the effect of recent low farmgate commodity prices weigh on the market.

But this is hogwash. The time is ripe for a significant downward movement in UK farmland prices, and a friendly mole in the land agent trade tells me that it is already under way, with offers for farmland common at two-thirds of asking prices with some acceptances at these levels.

Stephen Carr farms an 800ha sheep, arable and beef farm on the South Downs near Eastbourne

As farmers (and, remarkably, it is farmers who still buy most farmland even at current bonkers prices), it would not be surprising if we have all recently become much more cautious about buying farmland.

We face an unprecedented level of uncertainty as a result of the vote for Brexit, with the potential for a loss of access to the EU’s internal market opening us up to adverse trade tariffs on our food exports.

At the same time, the NFU has conceded that UK farmers will almost certainly face a decreased level of farm subsidy from a UK government once Britain has left the EU.

Then there are the other less obvious bearish factors weighing down land prices.

As we all know, farmland prices have been supported by demand from roll-over buyers for decades.

These buyers (farmers with profits from development land sales) have chosen to “roll” their cash into farmland rather than pay capital gains tax (CGT) often levied at rates as high as 40%.

But the financial incentives to roll over have been whittled away in recent years. CGT is only charged at 20% and, with entrepreneurial retirement relief available, CGT can often be reduced to just 10%.

This means many farmers who might have been very determined to roll over might now quite sensibly chose to simply pay the tax.

Similarly, inheritance tax reliefs on farmland are not as valuable as they once were, thanks to the same reliefs now being available on most business assets.

Add to that the winding down of renewable energy subsidies by this government that had for several years created demand for land on which to build solar farms or to grow feedstock for anaerobic digestors, and you have a perfect storm of adverse factors affecting land prices.

The last time I bought any land was way back in 2001 when I purchased 80 acres at a price of £1,400/acre after the land had failed to sell at auction.

Since then I’ve watched astounded as UK bare land prices have escalated to as much as £13,000/acre.

But just how far land prices will fall only time will tell, and I’m certainly not suggesting that they will get back to my 2001 level of £1,400/acre.

But farmers have a lot of money borrowed (nearly £18bn at the last count, which is double what it was 10 years ago) and, with land as their main security, my hunch is prices would not need to fall far before an even more bearish factor is added to a further price decline: distress sales where the banks start to pull the plug.