We have been getting our priorities all wrong, you know. The real crisis in farming isn’t low commodity prices, why most modern agrochemicals just don’t work, what’s going to happen after Brexit or what sort of motorised handbag is going to replace the Defender.

The biggest issue in modern farming is far more down to earth: Why is it impossible to find a pair of Wellington boots that last longer than a couple of months? 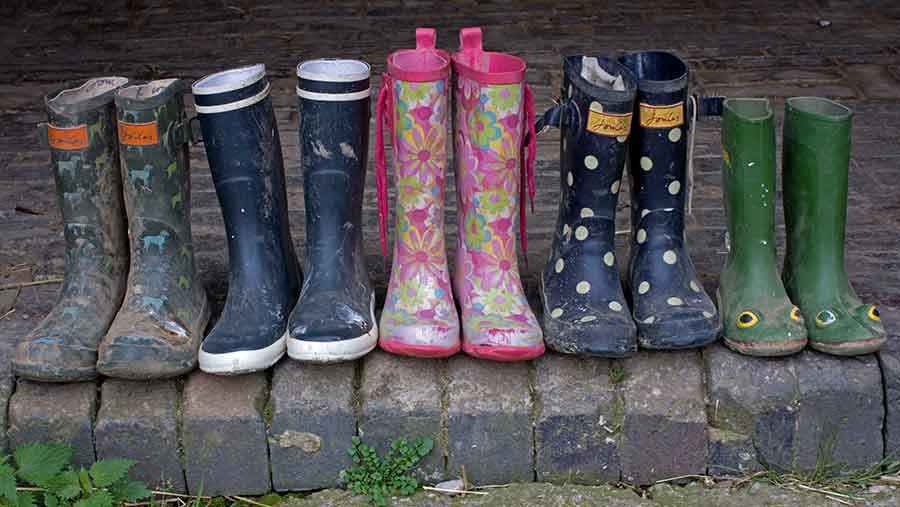 Take the wellie position in Flindt Towers at the moment. I recently got hold of a new brand of boots, mid-priced (£70) and bearing great claims of comfort and longevity.

Within a couple of weeks, the insoles had come out – no great problem, I suppose – but then the right heel collapsed.

I’m not sure how – I suspect that there’s a honeycomb structure that is designed to keep the weight down, but it simply couldn’t cope with 18st of Flindt landing on it.

The upshot is that I now walk with one leg effectively an inch shorter than the other, and every other step is accompanied by a comedy “scroinching” noise.

But at least the boots are still waterproof. The lovely Mrs Flindt invested in a new and rather expensive pair of Wellies at our local farm superstore about three weeks ago, and was shocked to find her feet getting wet after only a couple of days. And at this time of year, when her new calves have arrived, it’s not just water getting the feet wet.

The boots were whisked back to the shop before the bill for them had even arrived at the farm.

Let’s not go on about the “good old days”. They weren’t. But I’m sure there was a time that a pair of Wellington boots would give satisfactory service before giving up.

I can remember getting rid of pairs (or sending them to the attic for guests’ use) because the soles were worn smooth, or because one too many prongs, honed to razor-sharpness by concrete floors, had lanced the rubber – always a “when did I last have a tetanus jab?” moment.

One of the first luxuries I awarded myself on taking over the farm 25 years ago, along with a brand-new Ford 7810, was a pair of French neoprene-lined boots, which endured mud, spray, liquid fertiliser and puppies for the best part of a decade.

They were very pricey, but it was worth it. Their replacements lasted less than a year.

If the wisdom of the internet is to be believed, the problem is, inevitably, manufacturing being moved overseas, mainly to the Far East.

I joined a hard-core rural group on Facebook, and asked how everyone was getting on with their wellies.

The response was a torrent of horror stories about all the makes you can think of, and all prices, from the £20 bargains to the ones that cost the thick end of £200. It’s bewildering. We’re not talking about revolutionary new technology – Wellington boot manufacture using vulcanised rubber started in France in 1853.

The last word should go to one Facebooker, buying a famous British make (one that our farm superstore now refuse to stock because of endless returns).

“Got my boots direct from *******,” he commented. “They last about four to five months. I then send them back and get a new pair. I reckon I will never have to buy another pair of Wellingtons as long as I live. Lol!”