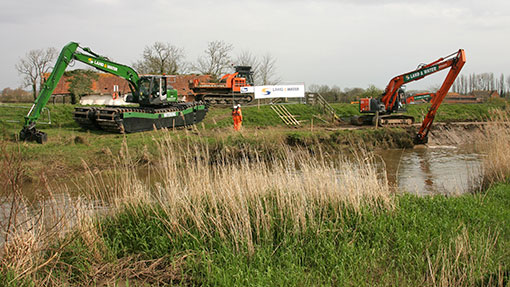 Defra secretary Owen Paterson has agreed to meet farmers and the Environment Agency (EA) amid concerns over the lack of progress on dredging rivers in flood-hit parts of Somerset.

Mr Paterson acknowledged farmers’ fears that unless dredging was carried out quickly, their land could once again be flooded this winter. He added that he planned to travel to the Somerset Levels on Friday (30 May) to hold talks between the agency and farmers.

“The Environment Agency assure me that they are on target, but I’m meeting them, along with councils and the internal drainage board, to make sure we are on track,” Mr Paterson said during a visit to the Royal Bath & West Show on Thursday 29 May.

“It’s not for me to micro-manage, but I’m very keen to see real partnership working between the EA and the internal drainage board. It’s incredibly important that local landowners have the power to do their own work to keep rivers clear.”

Mr Paterson urged farmers to apply for grants of up to £35,000 to restore their land, under the second phase of the flood relief fund, but warned them that the deadline of 28 June was looming. “We’ve made it as simple as possible to apply,” he said. Rather than securing three quotes in advance, farmers now only needed to provide standard costs and could claim retrospectively.

See also Flood-hit farms – how you can help

John Mortimer, south-west director of the CLA, said the EA had dredged 10% of the 8km of river earmarked, and warned that farmers should not inherit management of watercourses suffering from 40 years of abandonment. “There must be 100km of river channels that need dredging. The EA had the duty and the power to act, and must exclusively accept responsibility for the situation we’re in,” he said.

“We need to undo 40 years of neglect and then put in place a system where landowners have a way of funding and actively maintaining the river channels. If the government wants responsibility to be transferred, they need to give us a clean system and let us get on with it – you can’t transfer a system that is still fundamentally corrupted after years of neglect.”