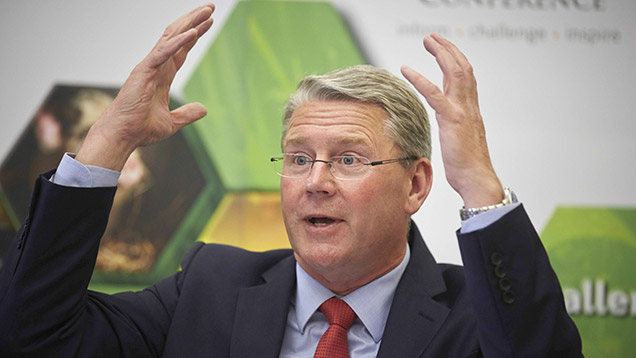 Fly-tippers have targeted the farm of former NFU president Peter Kendall by dumping piles of industrial waste in gateways.

Mr Kendall took to his Twitter account (@pkendallfarm) to vent his fury after his arable farm in Bedfordshire was targeted three times in two weeks.

He tweeted: “Fly tipping b******s dumped in consecutive gateways overnight! And it’s our liability to sort out. Change the law?”

Mr Kendall also posted pictures on his Twitter account of the heaps of fly-tipped mess dumped on his farm.

Standing in a field of oilseed rape on Wednesday (20 May), he told of his despair at being targeted, especially at one of the busiest times of the year for farmers.

“I got to the farm at 5.45am this morning and the first thing I thought about was how sad it was that someone had decided to save themselves a few quid by dumping their mess on my land,” said Mr Kendall.

“There is already litter blowing in the fields and it is frustrating to think about the time and cost it will take to clear it up.

“We are all putting money into margins and we have been creating small bits of coppice to try to improve the countryside in the run-up to Open Farm Sunday.

“Then you get people who look at farmers and think they are making a mess of the countryside. It is the whole cloud that hangs over your head.”

Mr Kendall said he would report the incidents to police and his local council. But he didn’t think it would make much difference.

“I haven’t reported it to the police or council yet, but what are they going to do?” he added.

“At the end of the day, farmers end up having to clear the mess up themselves.”

He suspected whoever dumped the rubbish had chosen his farm because it was an easy target, located near the busy A1 road.

“We’re not far from the A1 and there are built-up areas nearby. It looks like the waste has come from a building firm.

“If you go to a dump in a commercial van, you will get charged to dispose of any waste. Rather than paying for disposal, these people are just tipping it on farmers’ land.”

Mr Kendall stepped down from his role as NFU president after eight years in February 2014.

Since then, he was appointed as chairman of the Agriculture and Horticulture Development Board (AHDB). He has also been spending more time working on the farm and watching his sons play cricket.

He farms the 620ha arable farm in Eyeworth, east Bedfordshire, in partnership with his brother Richard.

Under the Environmental Protection Act 1990, fly-tipping is a criminal offence, which carries a maximum fine of £50,000. However, it is the landowner’s responsibility to clean up any fly-tipped mess dumped on private land, including farmland.

A spokesman for Central Bedfordshire County said: “As a council we are responsible for removing waste fly-tipped on public land, but fly-tipping on private land is the owner’s responsibility.”