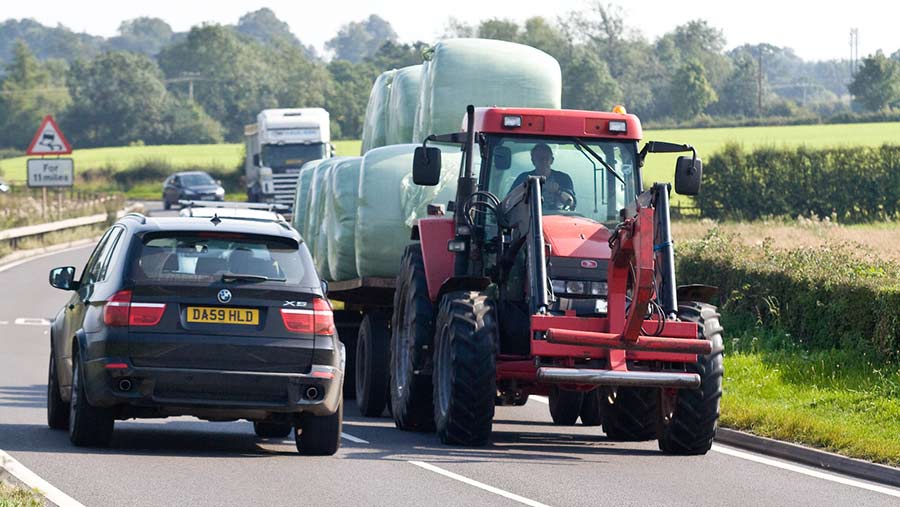 Tractors and other farm machinery could be banned from using a major trunk road in Wales at peak times, forcing farmers and contractors to use alternative routes along narrow country lanes.

The Welsh government is considering restricting opportunities for vehicles that don’t achieve a minimum speed to travel on the A55 – an 83-mile stretch of dual carriageway running between Holyhead and Chester.

“This would be at peak times of the day so that people who own or rent vehicles such as tractors don’t cause further delays and congestion to other motorists, but only in areas with viable alternative routes,” a government spokesperson told Farmers Weekly.

Farmers and agricultural contractors say they will resist the proposals, while farming unions are concerned that any ban could set a precedent for the roll-out of similar schemes on other trunk roads.

The government confirmed that its plan would need to pass legal scrutiny and that a consultation would be held in due course.

“We are committed to ensuring the A55 is fit for the 21st century for all road users and hope that those who regularly use the A55 take part in the consultation so nobody feels like they’re being excluded,” said the government spokesperson.

But the Farmers’ Union of Wales (FUW) says the issue has never been identified as a problem in its regular meetings with North Wales police.

FUW Caernarfonshire senior executive officer Gwynedd Watkin said agriculture employs thousands of people along the A55 corridor. “I’d really like to see some evidence there is a genuine problem,” she said.

“If this goes ahead, it could set a precedent for all other main roads, and such a proposal should be rejected outright.”

NFU Cymru is also deeply concerned about the precedent it could set.

“Farming, like any other industry, needs to have good transport links and farmers must be able to access their land at all times of the day to ensure the welfare of their animals and smooth running of their business,” said policy adviser Dafydd Jarrett.

Businesses threatened by ban on road use

One agricultural contractor who uses the A55 several times a week says a ban would make his business unviable.

Andrew Kippax’s depot at St Asaph is two miles off the A55 and he uses the road to get machinery to clients’ farms.

“I have driven along it this morning with a maize harvester and had one person hanging out of the window sticking up two fingers at me,” he admitted.

The road was built to stop vehicles using alternative routes through local towns and villages. “If we went back to using those, it would be catastrophic for the area,’’ Mr Kippax insisted.

“What plans have the government got in place to ensure there is no disruption to farming operations?’’

He said the Trunk Roads Agency had closed lay-bys between St Asaph and Chester to prevent slow-moving vehicles joining a fast carriageway, so he could no longer pull over to allow vehicles to pass.

A55 accidents involving tractors ‘few and far between’