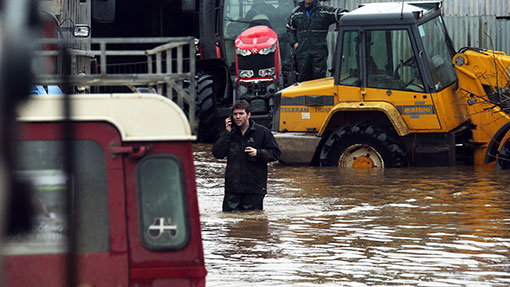 Well-wishers are being urged not to set off on unannounced fodder “treks” to help flood-hit farmers, but to pledge future donations of animal feed and bedding instead.

The plea comes amid a mercy mission involving two Wakefield farmers who set off on a 225-mile tractor trip with trailer loads of straw and fodder to Somerset.

Widespread publicity generated by the trip has seen a surge of interest from farmers and other well-wishers who want to make similar deliveries.

But farm leaders in the South-West say the short-term situation is now “under control” with enough livestock safe and bedding available.

See also: How you can donate cash to charities offering support to flood-hit farmers

NFU South-West director Melanie Squires said: “We fully understand and appreciate people’s desire to pitch in immediately with practical help when they see the heartbreaking pictures of colleagues and their animals up to their waists in water.”

She added: “What we now need are the pledges of fodder or straw, rather than the actual deliveries, so that we can call upon people’s generosity as and when it is required over the coming weeks and months, when the waters finally abate.”

Ms Squires acknowledged that the timing of the “pledge don’t deliver” plea was “unfortunate” when NFU colleagues in the North East had worked so hard to publicise the tractor drive from Wakefield.

But she said storage space was limited at Sedgemoor livestock market, which has become a make-shift depot for deliveries of feed and bedding on the outskirts of Bridgwater, Somerset.

Thanking the farming community for their support, Ms Squires said it was important to recognise that farmers outside Somerset had also been affected by flooding.

“What we now need are the pledges of fodder or straw, rather than the actual deliveries, so that we can call upon people’s generosity as and when it is required over the coming weeks and months, when the waters finally abate.”
Melanie Squires, NFU South-West director

An ad-hoc network of volunteers has emerged over the past week in a bid to help farmers hit by the floods.

Rural communities across the country are pulling together to send emergency supplies of animal feed and bedding to Somerset.

These include farmers, YFC clubs, auctioneers, retailers, charities and organisations such as the NFU.

Mr Rowbottom said: “Hopefully our journey will help highlight the solidarity we all feel with those farmers in Somerset who are facing such tough times.”

NFU North-East director Richard Pearson said: “The NFU is working round the clock to provide direct support to our members in the South-West and to help co-ordinate the crisis response on the ground.”

NFU South-West said anyone who wants to provide fodder and bedding should email south.west@nfu.org.uk or call 01392 440 700.

All pledges and offer will be logged and matched with farmers when the need arises.