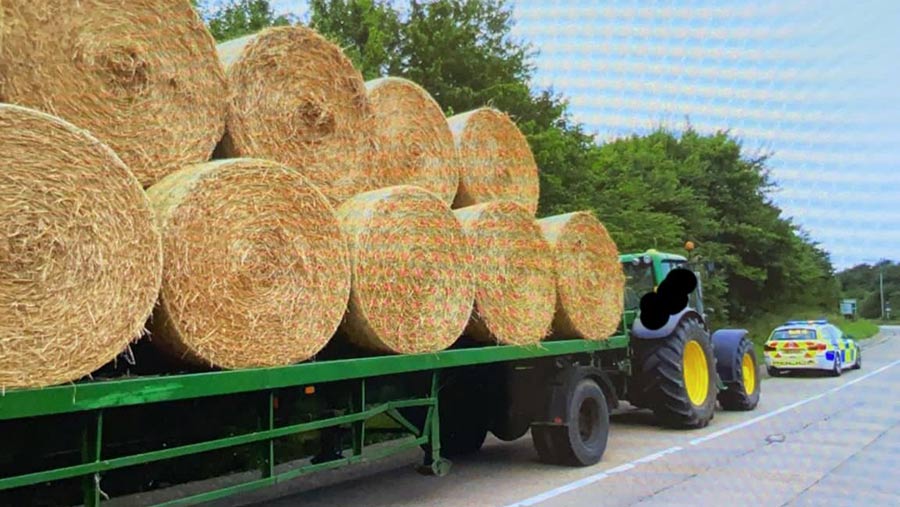 Farmers and contractors have been reminded to secure their trailer loads properly after police in East Anglia reported “shocking” stops by officers checking vehicles as part of a road safety operation.

Norfolk and Suffolk roads policing team stopped a tractor carting big round bales using a trailer that appeared to have no strapping, during patrols on the A47 and A11 last week.

Officers posted a picture of the unsecure load on Twitter (@NSRAPT), with the warning: “There have been some shocking stops on vehicle loads. There should be more than just gravity holding loads onto vehicles.”

Jill Hewitt, chief executive of the National Association of Agricultural Contractors, said it was vital that all loads are secured, whatever the journey.

“The load must be sufficiently secure in case of emergency stop or other unexpected hazard, and must not cause a danger or nuisance to others by the load falling or being blown from the vehicle,” Ms Hewitt told Farmers Weekly.

“In an industry with a poor safety record, we must not take risks with heavy bales that can, and do, cause serious injury or worse if they fall on a passing vehicle, cyclist or pedestrian.

“If you find yourself by the roadside with a police car, you are likely to be looking at a telling off, fine and penalty points, but if you find yourself parked next to an ambulance, not only will you be desperately wishing you had secured the load, you will be facing potential charges of dangerous driving or worse.”

Securing a load for transport is normally achieved through a combination of:

The load-securing system must be capable of restraining a force equivalent to: