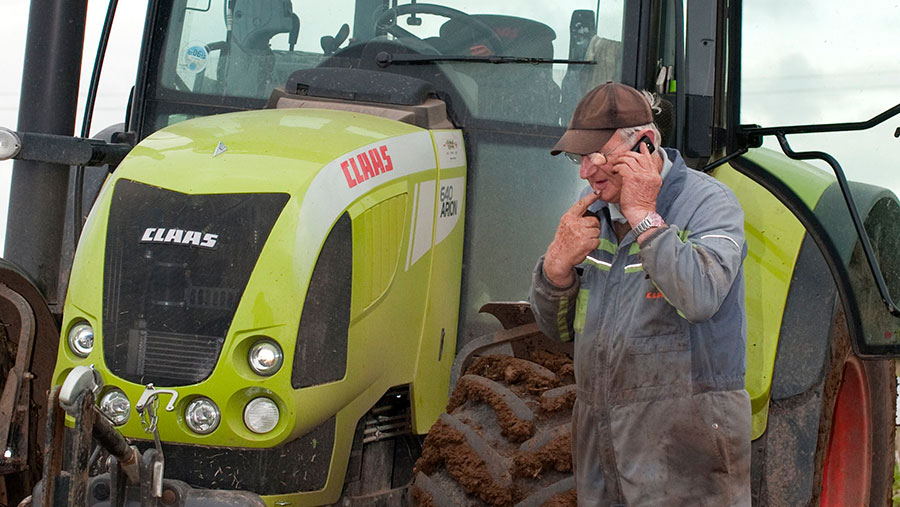 Farmers are still struggling with unreliable and often non-existent mobile coverage, according to the second NFU survey on mobile phone connectivity and broadband.

Only 15% of farmers polled said they had reliable mobile phone coverage across the farm.

No signal for mobile phones means farmers, who often work alone, cannot contact anyone in the event of an emergency.

If you have an accident, a good signal means you can get the emergency services in quickly. It could be the difference between life and death Tom Price, NFU farm safety and transport adviser

Tom Price, NFU farm safety and transport adviser, said: “Farmers who don’t have good mobile coverage are at a disadvantage and are at risk.

“If you have an accident, a good signal means you can get the emergency services in quickly. You may need first-aid advice over the phone. It could be the difference between life and death.”

Mr Price cited the example of Norfolk farmer and NFU member Tim Papworth, who fell and suffered a life-changing head injury while changing a light bulb in October 2010.

“They were able to get the air ambulance service in quickly and Tim was taken to hospital.”

Every harvest, fire services deal with a number of combine fires. But poor or no mobile coverage can delay getting fire crews on the scene quickly, risking further damage to crops and machinery and, potentially, lives.

The latest survey of NFU members found 75% of smartphone users now have 4G mobile phone coverage, compared with 70% not having coverage in 2015.

But the NFU said it is essential that farmers have access to an effective 5G network – universal coverage, with safe, fast and efficient systems – while working in the countryside.

The NFU said the government “must wake up” and ensure the universal rollout of universal superfast broadband and complete mobile coverage to all farms and growers “as a priority”.

The NFU polled 800 members for the survey in 2016. The results were published this week.