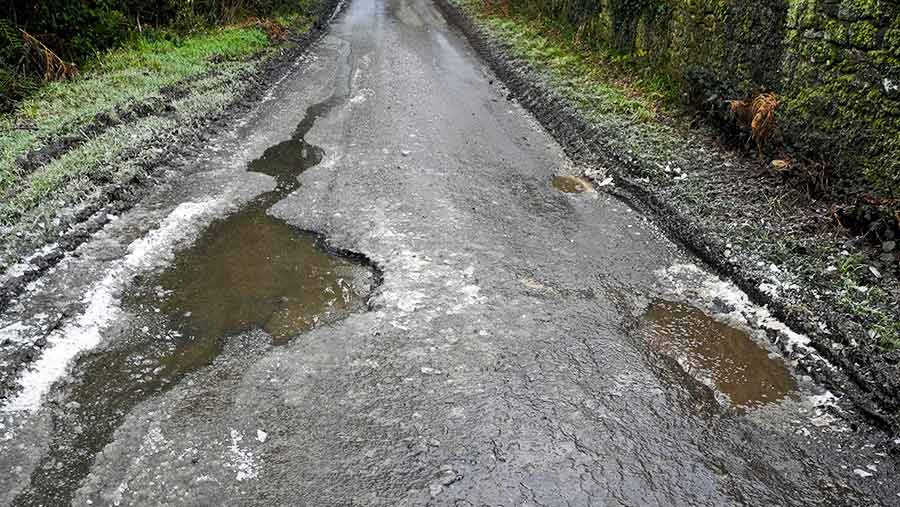 Farmers and rural drivers are being urged to take care on country roads peppered with potholes caused by bad weather and lack of maintenance.

Rural insurer NFU Mutual has raised concerns about suggestions that some rural roads are in such a bad state they could be closed altogether due to lack of funding.

Motorists are facing “huge problems” because of poorly maintained roads, a higher risk of accidents and a lack of gritting during the winter months, said NFU Mutual motor insurance specialist Ian Flower.

“The deteriorating state of rural roads has been exacerbated by the recent, prolonged freezes,” he warned. “Further flooding also poses an additional hazard as many deep potholes are disguised.”

Figures from NFU Mutual suggest a 48% increase in the number of pothole claims from 2015-17, with the total value of claims almost doubling over the same period.

More motorists are thought to be seeking recompense directly from local authorities, while others might shoulder the costs themselves rather than claim on their car insurance.

Many rural councils are under increased pressure to deal with road maintenance.

Earlier this year the Local Government Association called on the government to tackle the disparity in funding between national and local roads.

The Association said £1m would be spent per mile on strategic road networks such as motorways from 2015-20 – compared to just £21,000/mile for local roads.

There are also concerns that deteriorating rural roads will make access for the emergency services harder and response times longer – potentially putting lives at risk.

‘Arteries of the countryside’

Jeremy Atkins, an NFU Mutual senior agent in Devon, said rural roads were the “arteries of the countryside” and it would have serious implications if they became unusable.

“Other rural road users such as cyclists and horse riders are also at risk,” he said.

“They may need to take sudden avoiding action when they encounter a pothole or may ride, unsuspecting, into deep potholes which are filled with rainwater.”

The government announced last month that it was giving a further £100m to councils to help repair potholes and protect local roads from severe weather.

This was on top of £75m in government funding already given to councils from the Pothole Action Fund this year, as well as an extra £46m or highways authorities announced before Christmas.

Mr Grayling said: “We have seen an unusually prolonged spell of freezing weather, which has caused damage to our local roads.

“We are giving councils even more funding to help repair their roads so all road users can enjoy their journeys without having to dodge potholes.”