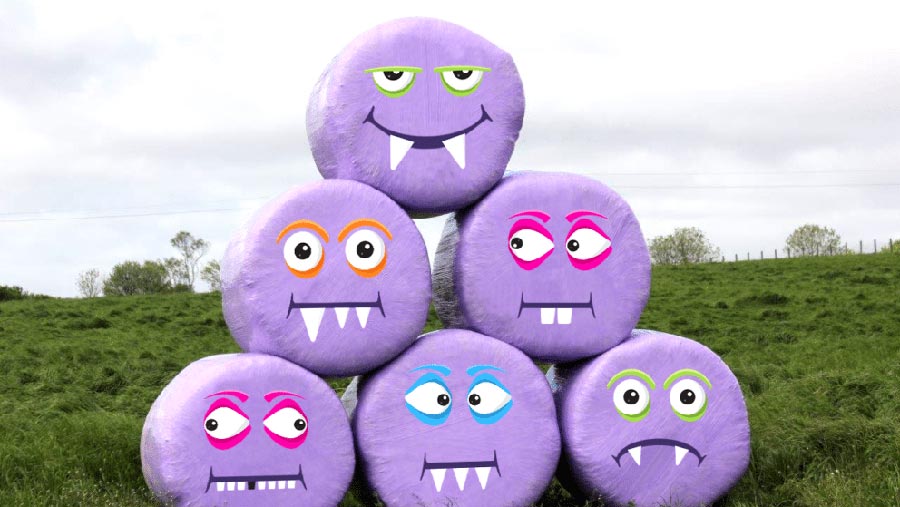 Purple-wrapped “critter bales” have started appearing across the countryside to raise cash and awareness of a charity for seriously ill children.

The critters are appearing in farm fields as a result of a competition for farmers organised by feed suppliers Carrs Billington Agriculture to support national charity WellChild.

Farmers and contractors are being asked to show their support by creating critter designs on purple silage wrap supplied by Zeus Packaging Group.

This is the third year of the purple bales campaign, which has so far raised more than £25,000 for WellChild.

Farmers taking part in the competition should send in photos of their creations to be displayed on the WellChild and Carrs Billington Facebook pages.

The farmer whose critter display is judged the best will receive two tickets to the prestigious WellChild Awards 2018, which will take place at the Royal Lancaster Hotel, London, later this year.

This star-studded event, which is attended by a host of celebrities, and often by WellChild patron Prince Harry, gives awards to inspirational children coping with serious illness and to dedicated child health professionals.

WellChild chief executive Colin Dyer said: “The bale critters in WellChild purple will be a surprising and amusing sight in fields all over the UK and the money raised will help greatly with our work to support seriously ill children and their families.”

Rae Tomlinson, Carrs Billington managing director, added: “We are delighted to continue our support for a charity that undertakes such valuable work.

“The efforts of WellChild make a considerable difference to the lives of seriously ill children and we know our staff and customers have enjoyed the purple campaign in previous years.”