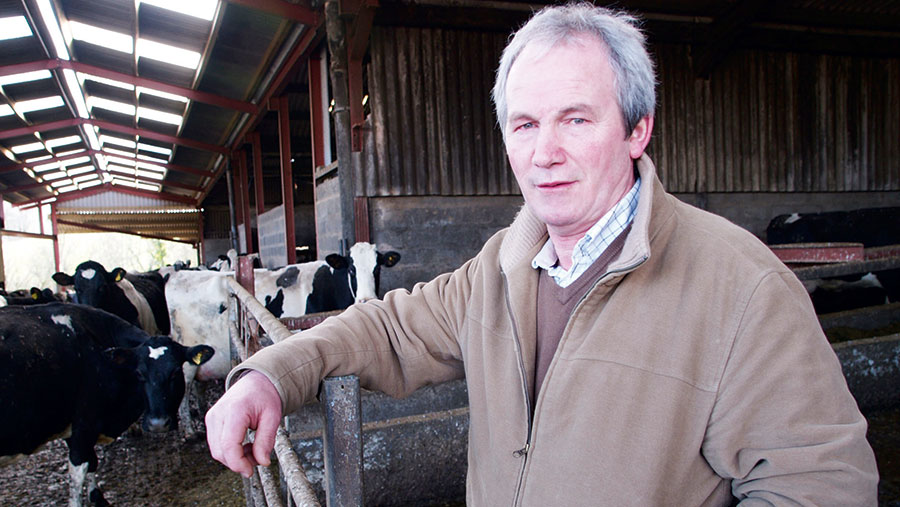 At the Royal Welsh Show this week, NFU Cymru representatives explained to Defra secretary Michael Gove the outstanding contribution that Welsh farmers make to society as producers of Wales’ food, environment and landscapes.

NFU Cymru president Stephen James tells Farmers Weekly reporter Philip Case that while he shares Mr Gove’s ambition for enhancing the environment and food production, Wales’ overall contribution to food security must not be undermined in the Brexit deal.

Q Over 12 months after the Brexit vote, how would you assess the current situation in Welsh agriculture?

A At the moment, we’re on a high. Commodity prices are really good. We have had a TB announcement from Welsh government, which helps. It’s not fantastic, but it’s a step in the right direction.

The biggest uncertainty hanging over Welsh agriculture is what happens post Brexit. We are pushing hard for a transitional arrangement. We feel the customs union would best deliver that until we get a free-trade deal. That’s our message.

Within a UK framework, we expect agricultural policy to be delivered by Welsh government.

Q Do you share cabinet secretary Lesley Griffiths’ concerns about a Westminster “power grab” of farm policy after Brexit?

A Whatever is agreed on policy has to be fair to Welsh farmers. We have had 18 years of the Welsh government delivering devolved policy on agriculture. We have got used to this and that’s what we expect going forward.

We are between a rock and a hard place. Welsh government sees the Great Repeal Bill as being a land grab, yet we are told by Westminster it will be retained law for the moment.

Our message would be these two bodies need to discuss it and hammer it out. We, as an industry, are unclear on how that will progress and we need clarification because farmer confidence and investment in businesses is essential.

Q Can Defra deliver for Welsh farmers on Brexit?

A Like everything, there will be winners and losers. Wales had a 15% pillar transfer, for example. That was something we lost on. We have still got individual compensation in Wales. You would guess pluses and minuses would happen going forward.

We don’t want large differences between England and Wales because that imbalances the industry as well. It’s not going to be exactly the same because Wales, by its landscape, is a lot different to the east of England.

Q What did you tell Defra Michael Gove?

A That having driven through the Welsh landscape, farming by definition, is very different in Wales to parts of England and Europe. We feel we are green by definition. Wales shows farming and environment really works together. We have got hedges and trees, yet we have sheep and livestock right across the country.

Q What is your view on Michael Gove’s vision for a “green Brexit” for farmers?

A I think farmers want to hear they will be encouraged to produce food in an environmentally friendly way. We’re up for that. We have had lots of agri-environment schemes over the years to prove it.

The “Tir Gofal” pan-Wales scheme was oversubscribed. It was an excellent scheme. It was one of the flagship schemes in Europe at the time.

It came to an end five years ago and Glastir was brought in. Glastir has not been so popular, but having said that, whether it’s on peat bogs or delivering various environmental goods, farmers are supporting it because it is an extra string to their bow.

We know the market place fluctuates. At the moment, prices are good. But the reality is that they will go up and down, so you need that other sources of income. And we need to encourage farmers to diversify as well. Tax breaks can help, whether it’s holiday cottages or renewables, there are opportunities out there.

Hopefully, carbon trading – planting trees to offset carbon – is going to be an opportunity for the industry going forward. Farmers can deliver on climate change. But this is a discussion to be had going forward.

Q Are you concerned about what might happen to hill farmers if their subsidies are cut?

A We need to address this. I’m a dairy farmer and the single farm payment isn’t the most important thing [compared with sheep farmers]. But we have to deal with volatility and we would want support for volatile times.

The red-meat sector, particularly on the uplands, needs a different sort of support. We can be innovative. We have got a blank sheet of paper this time to create things that work for us.

When you come to the Royal Welsh Show and take a look at all the trade stands, you realise how important agriculture is because all these businesses thrive or survive because of a strong agricultural industry.

It is important to stress when we get those payments, nine times out of 10 that money goes straight on paying bills. That’s the reality; most businesses will tell you that. I think that’s an important message to tell government. Farm payments subsidise food prices as well.

Q What would happen to Welsh sheep farming if the UK government abolished subsidies and tariffs were applied to produce?

A The Welsh sheep industry would disappear. That would impact then on the wider rural economy. There would be fewer people living in the countryside. There would be land abandoned. It would be a doomsday scenario. That’s what we don’t want.

Q Should we incentivise young people to start careers in farming?

A Yes. We need incentives to attract more young people into farming. Sometimes, it’s just a first step. You don’t want to make it too easy for people. But there are a lot of enthusiastic young people out there and they just need help into different routes of the market because many cannot afford to buy land.

It isn’t all about buying land and tractors. There are other ways to get there through management roles. We need to be innovative here and use examples from other parts of the world, such as share farming in New Zealand.