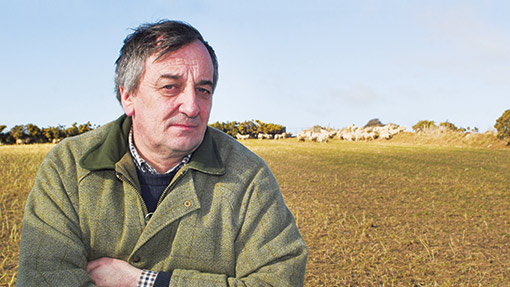 Meurig Raymond had barely drawn breath as the newly elected NFU president when he met farming leaders in Argentina for his first official overseas appointment.

“It was both inspiring and motivating to see so many farming organisations across the world come together with one clear message: Food production needs to be taken much more seriously,” he reflected.

Since then, a jam-packed timetable has taken this Pembrokeshire farmer to Brussels twice – for the launch of the British Agricultural Bureau Manifesto in the European Parliament and to a meeting of the Committee of Professional Agricultural Organisations in the EU.

Mr Raymond marked his first 100 days in office on 6 June.

Since taking office he has addressed several conferences and organisations including the Royal Association of British Dairy Farmers, the Road Haulage Association, the British Pig & Poultry Fair and the annual general meeting of Royal Agricultural Benevolent Institution.

When Mr Raymond stepped into Peter Kendall’s shoes, he was well prepared for what lay ahead. He had been second in command for eight years and knew what to expect.

But nonetheless, he has been struck by the sheer intensity of the role. “It is very easy to fill the diary, there are a huge number of meetings to attend and important issues that need to be discussed. As president, the buck stops with me.”

Mr Raymond has spent many of his 100 days travelling around the country meeting the NFU membership. In recent weeks he has attended the Devon County, Royal Bath & West, Cambridgeshire and Royal Cornwall shows.

“I need to hear the issues that concern farmers at grass-roots level and to update them on what the NFU is doing for them. The membership has high expectations of the leadership and we must make sure we deliver on that expectation.”

Since February, those issues have included bovine TB, CAP reform and, in recent weeks, the collapse of the beef price. On Monday (9 June) he joined farm leaders from the UK and Ireland in London to discuss the crisis in the beef sector.

As a member of IGD Policy Issues Council, he has already met twice with the bosses of all the major supermarkets and made clear that short-term cost-cutting by retailers is a source of huge concern across all farming sectors.

“A lot of these concerns were expressed at my first NFU Council meeting in April where the Environment Agency and Defra were also present to be challenged on the importance of improving flood defence systems in rural areas so that we don’t have a repeat of the disasters that have taken place over the past couple of years,” said Mr Raymond.

He has without doubt taken on the NFU presidency at a time of great change in UK farming.

Also, with a general election on the horizon, it is a period when politicians are somewhat reluctant to make decisions that could lose them votes with the electorate beyond the farmgate.

“The coming months are going to be challenging because we are in a political vacuum,” said Mr Raymond. “The political parties will be writing their manifestos so we will be meeting with party officials to make certain that the voice of farming is heard and included in those manifestos.”

Measures to eradicate bovine TB are a case in point. He has met secretary of state Owen Patterson at farm meetings in Devon and Somerset to discuss the badger cull.

“We are pleased that the cull will proceed in Somerset and Gloucester but greatly disappointed that there will not be a further rollout this year.

My message to Owen Patterson was that the current TB situation is unsustainable for farming and it cannot continue.

“The chances of making much progress before the next election are slim but that doesn’t stop us putting strategies in place.”

There is no doubt that the role of NFU president is a position of influence. Politicians and policymakers do sit up and take notice.

“There is a huge sense of achievement when you convince policymakers, but there are some days when you come away feeling like you have wasted your time,” Mr Raymond admitted.

On the day that marked his 100 days in office, Mr Raymond attended the Royal Cornwall Show and later travelled to Cambridge for a reunion of the 1985 Worshipful Company of Farmers advanced management course.

“We had a near-full turnout, which is quite an achievement after 29 years,” he reflects.

The reunion meant a weekend away from home, but a Friday mostly finds Mr Raymond returning to Pembrokeshire to spend time on the farm.

“You have to fit your life around the job, but it is important for me to switch off at weekends and to get out on the farm.”