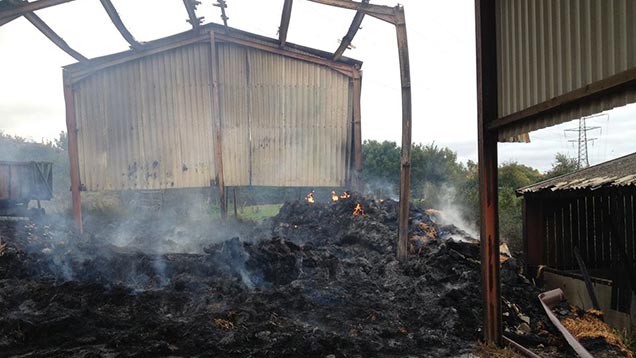 A Warwickshire rock band saved a farmer’s tractor from going up in flames after they plucked the vehicle from a burning barn.

Leamington-based band Wired: The function band were travelling back after playing a gig at a showjumping ball in Birmingham when they spotted the barn blaze.

Three of the band’s members, Barney Porter, Mark Jervis and Harry Synge, were driving home on Europa Way, Leamington, on the way to a McDonald’s restaurant when they saw flames engulfing the barn at Cottage Farm.

The band members leapt into action and moved the farmer’s tractor away from the barn and cleared a trailer from the entrance to allow the fire service to access the farm.

Mr Jervis, who farms himself, said although no livestock was in the barn, he feared the tractor would catch fire.

“Luckily the keys were in the ignition, so I got in the tractor and drove it away from the barn,” he told the Leamington Spa Courier.

“Its back wheels were on fire and the steering wheel was so hot I could barely touch it. We managed to move a trailer away from the entrance so the fire brigade could get in.”

Warwickshire Fire and Rescue Service said they were alerted about the fire by a 999 call at 3.29am on Wednesday (7 October).

Three fire engines from Leamington and Kenilworth and a water carrier from Coleshill were sent to tackle the blaze.

“The police were requested to attend due to hose running across the main road and this road has now been closed due to firefighting operations.

“Western Power engineers also attended due to power lines running close to this incident, although the power lines have not been affected by the fire.”

Fire crews finished dampening down and left the scene at 1.15pm on Wednesday (7 October). The cause of the fire is under investigation.