An 11-year-old farmer’s son has issued a plea to the public to put a greater value on agriculture.

Alun Powell, whose parents, Rob and Tracey, run a beef and sheep farm at Rhosferig and Blaenbwch near Builth Wells, stars in an NFU Cymru film that urges people to back Welsh farming.

Alun, a pupil at Builth Wells Primary School, highlights the threefold role of farmers – as producers of the nation’s food, guardians of the environment and managers of the landscape.

The film was launched at the Royal Welsh Show in Builth Wells as part of NFU Cymru’s #BackWelshFarming campaign.

Alun wants to follow his parents into farming, but is under no illusion that producing food is an easy job.

“There’s a lot of hard work and a lot of long hours,” he admits, but encourages viewers to “shout from the hilltops and tell politicians what an important industry farming is to Wales”.

“I think it is fantastic that we have a generation of youngsters like Alun, who are passionate about this industry and want to play an active role in farming in the future.

“As we approach a period of great change, it’s important that we take this opportunity to make sure that Welsh farming is on a firm footing for the next generation.”

‘Loud and proud’ to be a Welsh farmer

Meanwhile, Carmarthenshire lamb producer Garry Williams, who runs a flock of 650 ewes on the edge of the Black Mountains, is the face of a poster campaign that champions the role of Welsh farmers as food producers. 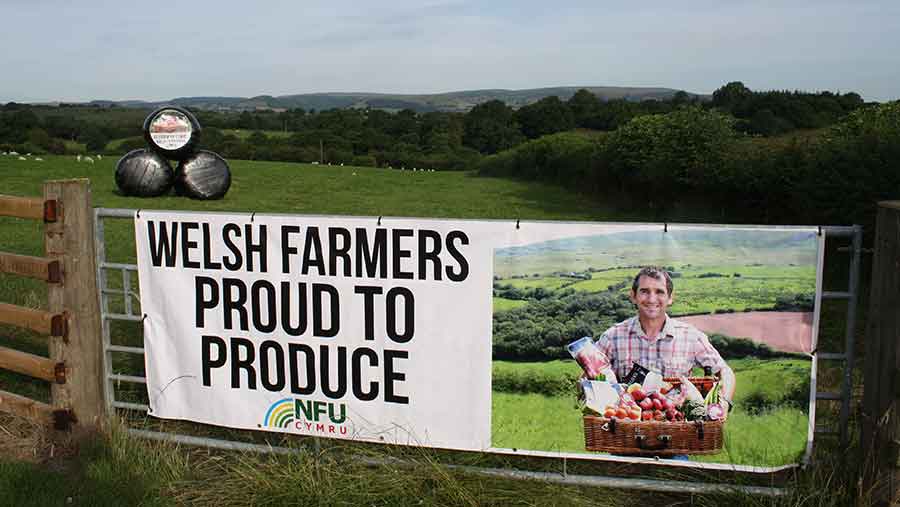 Mr Williams is featured on a gate banner produced by NFU Cymru to coincide with this year’s Royal Welsh Show.

The campaign capitalises on the success of the union’s bale sticker campaign last year; all roads leading to the showground were then lined with silage bales bearing a message encouraging the public to back Welsh farming.

Mr Williams, who is the Carmarthenshire NFU Cymru county chairman, said farmers needed to be “loud and proud” about the work they do.

NFU Cymru is asking social media users to help spread the “Proud to Produce” message by sharing pictures of the gate banners and branded bale stickers, with the hashtag #ProudToProduce or #BackWelshFarming.