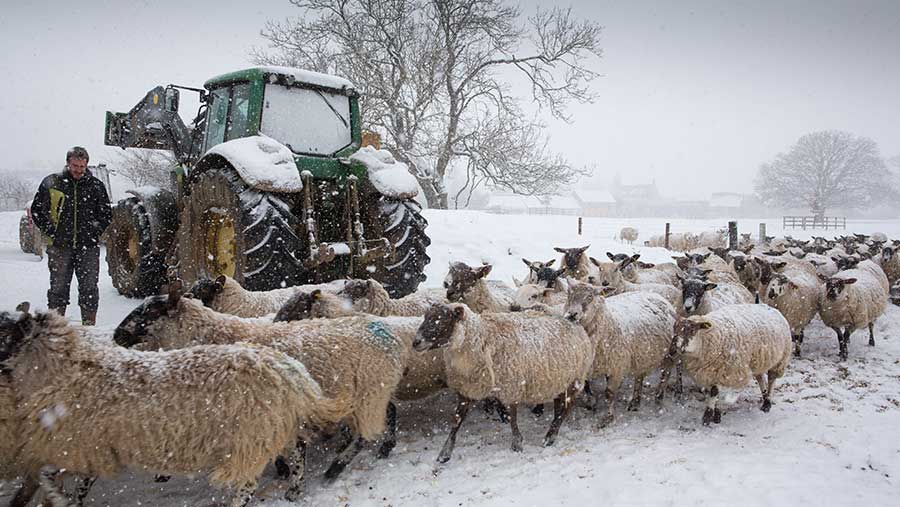 Farmers are being urged to prioritise the safety of staff and livestock amid concerns that rural communities could be cut off for days by heavy snow and large snow drifts.

The Met Office has issued a red warning – the highest level of warning – for heavy snow and blizzards in central Scotland around Glasgow and Edinburgh, south-west England and south Wales.

Further heavy snow is expected to fall on Thursday afternoon (1 March), overnight and into Friday (2 March) in these areas, with widespread disruption likely to roads and possible power cuts, as Storm Emma approaches.

See also: 9 stunning snaps of February snowfall on the farm

The forecaster says it will stay cold, with snow showers across the North this weekend. In the South, it is expected to turn less cold with further wintry showers expected. Bitterly cold winds will affect all areas.

Scotland and the north-east of England are currently the worst-affected regions, with deep snow still falling and drifting in high winds. There has also been very heavy snow in Devon and Cornwall, including low-lying areas that rarely see snow.

“Farmers across the UK are facing huge difficulties to look after livestock in the worst UK-wide winter weather we have seen for over a decade,” said Tim Price, rural affairs specialist at NFU Mutual.

“In the areas which have had heavy snow and temperatures falling below -10C, farmers are facing a massive challenge to get fodder to sheep and cattle which are out in the fields or housed in remote buildings.”

Tips on how to stay safe on snow-hit farms

1. Risk of pipes freezing in homes and farms is very high

Check pipes around homes, outbuildings and farm buildings every few hours as the temperature rises above freezing so you can isolate a leak before it causes devastating damage.

2. Dairy deliveries could be hit

Where roads in livestock areas are particularly badly affected by snow, it may be that some dairies are unable to collect milk. Some farmers take out uncollected milk insurance cover for this contingency, and we may see claims coming in if the present conditions persist.

Keep an eye on the depth of snow on roofs and move vulnerable livestock inside if snowfall turns wet and slushy and roofs appears at risk.

Safety for farmers, family members and workers is paramount. Farmers are under intense pressure, trying to keep animals alive and while working in extreme cold, but it’s vital to avoid taking risks which could lead to injury or fatalities.

Farmers should urge the public to avoid using rural roads unless it’s absolutely necessary. Abandoned vehicles are causing more problems for farm deliveries and milk collections than the snow itself.

Farmers have been posting photos and videos on Twitter and Facebook to show how they are coping with the snow.

Thanks to every British farmer who will be out in the snow today to put the food on our plates. pic.twitter.com/JD2MWK7W1n

Board members are sending in their snowy scenes. Horticulture chair @jg_porter has built a ‘tattie Box’ windbreak to keep his cattle out the chill of the North Sea wind at Carnoustie while Dumfries and Galloway region chair Rupert Shaw is keeping the hinds well fed at Borgue pic.twitter.com/gpZPTs4eKm

Livestock farmer Jonathan Sloan reported “a frozen tractor, frozen water and snow drifts the height of gates” at his cattle and sheep farm in Kinross, Scotland.

What a morning #BeastFromTheEast #wool the best insulator in the world. pic.twitter.com/yj4ou4tBk7

At Hill Top Farm, Malham, in the Yorkshire Dales, farmers have moved the cattle from the hilltops nearer to home to keep a closer check on animals and provide supplementary silage, if necessary.

More heavy snow is forecast with high winds, the worst possible combination so we bring the cattle nearer home to safety. pic.twitter.com/sIDdUbGjlT

“Lots of hill farmers will be worried about drifting snow as winds pick up – it’s really bad, especially for sheep. Good luck everyone, stay safe,” the farm posted on its Facebook page.

Testing times but all safe so far. pic.twitter.com/bts7nOziCI

“I can confirm that the beast from the east has well and truly bitten us,” he said, in a Facebook Live video.

However, Mr Nicolson said he was buoyed after a Swiss Valais blacknose ewe had given birth to triplets.

The Isles of Scilly got a rare dusting of snow. Staff at Salakee Farm posted a video of themselves feeding their Dexter cows extra hay.

Our Dexter cows enjoyed lots of extra hay today due to the very rare bit of snow we had on Scilly. pic.twitter.com/1gOEPtdh51

Finally, Berkshire farmer Colin Rayner tweeted a thank-you message to his staff for braving the weather, with some having travelled many miles to work.

Just to let you know our farm is open today. I would like to thank all my staff who traveled many miles to get to the Farm this morning.
We are busy snow clearing and gritting today.
We have the animals too! pic.twitter.com/ZRnKkkfzLz