With Brexit continuing to dominate the news agenda, Farmers Weekly invited two former Defra ministers – one opposed to the UK’s impending departure from the European Union and one in favour – to engage in an exchange of letters.

See also: All the latest news and views on Brexit 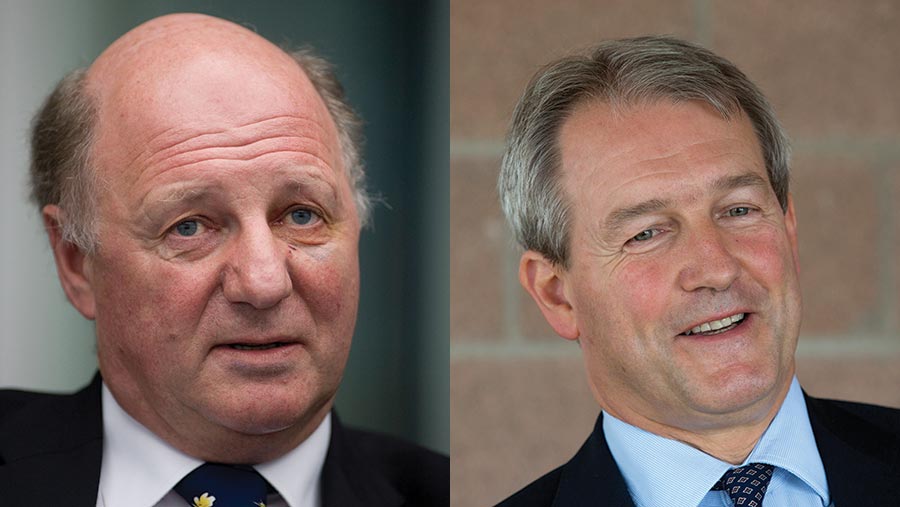 During the Brexit campaign you and other “leavers” made many assertions. We should start by addressing them.

You claimed that the savings would enable more money to be spent on farm policies. You also said that food would become cheaper for consumers. These two points cut right across policy discussions as they cover the key issues of subsidy levels and trade.

The UK spends about £3bn on all forms of direct support for farming. In England it is about £1.8bn – of which nearly a quarter is on environmental programmes. Too much or not enough?

My view remains that, in the face of the NHS, the deficit and other demands, as well as the attitude of the Treasury, there is no way that farming would get as much, let alone more.

I am also convinced by my experience in government that trade impacts on farming are of little concern to ministers when compared to the car industry, finance, construction etc. The Mercosur negotiations showed that it was other EU governments, not the UK, who were concerned about the consequences for our beef sector.

Most observers now agree that there will be less money and that direct payments will end. There is also now clear evidence that farming and food do not feature on the government’s priorities for trade negotiations.

At present, the EU contributes £2.9bn to the UK via the CAP and related subsidies, yet our estimated net contribution is £9.8bn.

Without speculating on precisely how much should be spent, a surplus returning from the EU leaves us free to spend more of our own money on whatever is appropriate for our own interests.

There are many competing demands on the public purse, but I firmly believe that the rural economy should be a clear priority. Food security is of self-evident national importance and ministers would do well to remember that the food industry is our largest manufacturing industry; bigger than cars and aerospace combined.

I am glad you agree that direct payments will end; the system of area payments is utterly unsustainable politically. But this does not signal a lack of interest in the farming sector. Rather, abandoning them is a prerequisite for forging the new trade deals which the UK requires.

Thanks to the benign British climate and soil quality, many food-producing areas can undoubtedly become globally competitive and prosper when they are freed of overbearing bureaucracy and allowed to embrace new technologies.

This is precisely the lesson which we can learn from New Zealand, which stopped production subsidies in the 1980s (and dramatically increased productivity) in favour of bold trade liberalisation.

It is towards poorer areas and marginal land which public spending can instead be directed, rewarding farmers for their environmental and conservation work.

Grand words about the importance of the industry are not enough. Neither does raising false hope achieve anything.

From your experience in office and with the Treasury, do you really believe the government will spend more than at present? I remind you of your side’s campaign slogan of £350m a week for the NHS.

Where we do agree is that trade will be not only critical, but more important than public money. But free trade must also be fair. I am all in favour of trade liberalisation as long as we do not lower our standards so we should prevent imports of any food produced using methods or techniques illegal here.

You will have experienced, as I did, the willingness of the UK government to pursue the Mercosur agreement at the expense of our beef sector, so do you really expect the interests of our industry to be given the same effort as for our car or financial sector? That is the difference between us and New Zealand. For them farming was their most important sector and export market, so their ministers gave it priority in the trade negotiations.

I would also challenge you on immigration? Do you believe that our industry can survive on the British workforce alone?

We have more common ground on the environment. Farmers should be paid for trying to improve specific aspects of biodiversity; even broad arable acres have immense potential. But it is in our hills and uplands where we can make the biggest change. Those areas are full of public goods: water retention, carbon sinks and wildlife.

Food and farming is a clear priority. 18.5% of the population of England and Wales live and work in rural areas. Food security is of vital importance for every citizen who eats three times a day.

The government has promised that it will continue the subsidies that come from Brussels until 2020 and there must then be a transitional period as we begin to tailor a UK policy to our own farming industry and our own environment.

It leaves us the possibility to spend more if there are justifiable public and environmental outcomes, as they do in Switzerland and Norway; this would not just be in marginal hill areas, but also around your “broad arable acres”.

I spoke to the meat exporters last month. Opening the UK up to competition will mean that the price of their cheaper cuts will come down, but many were confident that they would prosper as long as we guarantee them access to new global markets for their premium prime cuts.

There are an estimated 67,000 seasonal workers of non-UK origin in UK agriculture. The free movement of people will end and a new scheme similar to the Seasonal Agricultural Workers’ Scheme will have to be devised. We must make sure that UK farmers have access to sufficient supplies of skilled labour.

I don’t doubt your intentions, but there is no point in putting forward proposals which have no chance of being adopted.

Whilst we agree about the importance of the industry, we both know that is not the view in Westminster or Whitehall. I note that you do not deny the £350m was promised to the NHS.

On welfare you miss my point. Trade is about imports as well as exports and the UK will always be a significant importer of food. We can compete in many products, but not against imports produced using systems we cannot use.

No UK government will put up the price of food with more import tariffs, so fairness is essential.
Defra’s latest figures show that public money is three-quarters of net farm income, so we need to justify at least the same amount. Without direct payments we need a scheme of capital grants targeted at improving the productivity of a farm business where there is a business plan to achieve a viable unit.

Inevitably it would need to be broad brush, but should be used to encourage an increase rather than just maintenance of existing natural capital and linked to outcomes wherever possible. It should recognise the true costs of such measures so that conservation is seen as part of the business and not an add-on. Profitable conservation alongside profitable food production.

Brexit will happen and the time is past for wishful thinking.

What a miserable and gloomy view of the future.

Why would any sane government jeopardise an industry which employs one in eight of the workforce? Why would any government not grab every opportunity to help custodians of the land, upon which sits a £30bn tourism industry?

What is not realistic about creating a framework in which forward-thinking farmers can innovate or allowing them access to the world’s most advanced technologies, increasing food production and improving the environment?

We already have ambitious young farmers emerging from our world-class universities full of ideas as to how they will compete with global producers.

Once out of the CAP, we will be able to devise a UK policy directed at our own industry and our own environment. We will be able to direct £2.4bn (spent by public authorities on food and drink) towards our own producers. We will have the freedom to spend more than the current CAP on our rural environment and economy.

I am suggesting that these should be justified by clearly identifiable public goods: flood control, clean water, improved soils, growing biodiversity, as well as direct inputs which would improve life in rural areas.

Establishing world-class broadband and mobile communications, as well as increased training for improved technologies, would be a good place to start.

We can retake our full place on world bodies, working and voting with like-minded allies, ensuring that world regulation actually helps our own farmers and environment.

We have a great future once we leave the hated CAP and take back control. Let’s grab it.