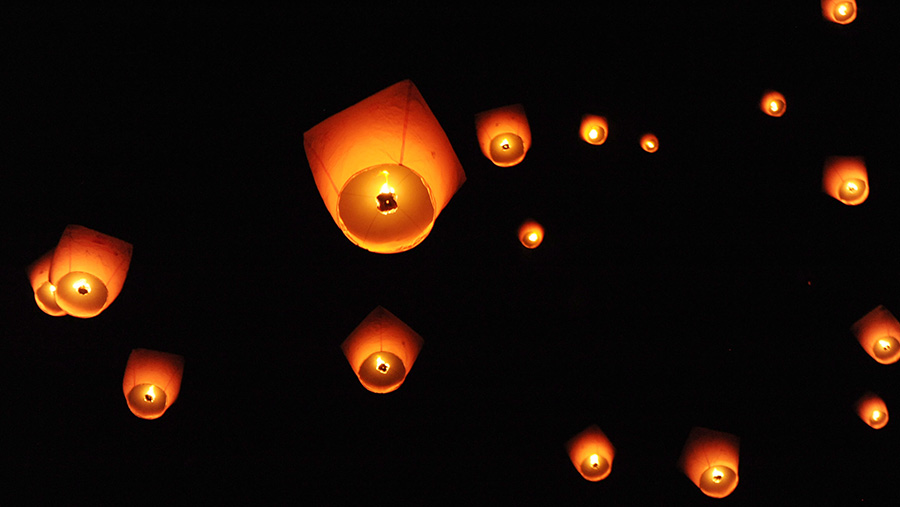 The public is being asked to consider their farming neighbours before setting off “dangerous” sky lanterns and fireworks this Bonfire Night.

Sky lanterns are constructed from paper with a wire or wooden frame and contain a lighted candle. They are a proven fire risk and can be a danger to animals and farm buildings.

When sky lanterns fall on farmland they can have devastating effects on those farm businesses. The frame material can get mixed up into feed, such as silage or grain, and be accidentally digested by livestock – the effects of which can be fatal.

A number of farming and rural organisations, including the NFU, the Country Land and Business Association (CLA) and the Farmers’ Union of Wales have repeatedly called for a ban on the sale of sky lanterns, as there is no way to guarantee they can land safely.

“While Bonfire Night offers a chance for people to enjoy themselves at one of the many organised displays, we would like them to do this without releasing sky lanterns,” said CLA director for the North Dorothy Fairburn.

“Releasing a naked flame with absolutely no control over where it will land is a serious threat to rural businesses, livestock, wildlife and the environment.”

“An increasing number of local authorities are banning the release of lanterns from council-owned land, and we hope the government will take note of a growing desire to see the use of these flying bonfires banned outright.”

Sky lanterns have now been banned on all public land by all councils across Wales, as well as dozens of councils in England and Scotland.

Farming unions are also urging the public not to set off fireworks near farm animals.

Livestock who are startled by the loud noises from fireworks are at risk of injuring themselves on fencing, farm equipment or fixtures and fittings within their housing.

Poultry are especially at risk of “smother”, where in a fear response birds huddle together, which can result in death for some.

Around one in 14 vets across the UK reported seeing animals with firework-related injuries during 2018, in a survey carried out by the British Veterinary Association (BVA) last December.