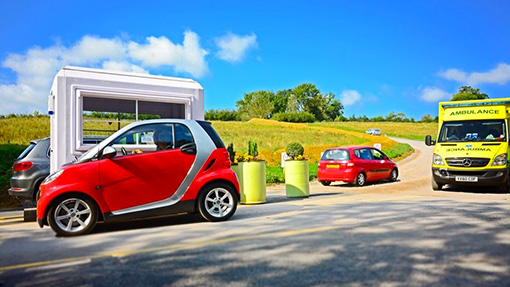 A Somerset farmer who saw the 100,000th driver use a toll road across his land is facing a race against time to make the venture pay.

The toll road was opened in August as farmer John Dinham of Roundhill Farm, Kelston, joined up with Bath businessman Mike Watts to create the first private toll road in the UK for 100 years.

The business venture provided an alternative route for frustrated commuters following the temporary closure of the A431 road between Bristol and Bath in February.

To break even it needed 150,000 commuters to pay tolls of between £1-3 during the planned closure from August to Christmas.

But the roadworks are nearing completion well ahead of schedule and the Bristol to Bath road could reopen earlier than planned. That means a further 50,000 vehicles are still needed to cover the £300,000 costs on the construction and upkeep of the toll road.

Mr Watts believes the recent money spent by Bath and North East Somerset council on fast-tracking repairs to the A431 will bring forward the original reopening date of Christmas time to mid-November.

“Hopefully we will break even around the first week of November but it really is going to be a race against time,” Mr Watts explained.

The road, named Kelston Toll Road, has been laid through a field of pasture to help reduce 14-mile detours and additional journey times for commuters of over an hour.

Although the traditional stone road came in cheaper than the original estimated £1m price tag, it still cost £150,000 to build, with running costs adding a further £150,000.

This includes a retrospective planning application cost of £25,000 after the road was built without one.

“At the minute we’re getting about 1,400-1,500 passes a day but this is increasing all the time, so hopefully we will get there.”

Motorists have been charged fees each way of £1 for a motorcycle, £2 for a car or a van and £3 for a caravan and trailers. They have also had the option of 12 passes for the price of 10.

If the target is met then the lucky 150,000th vehicle will receive VIP treatment with tickets to the Chelsea Flower Show, including lunch and a guided tour with horticultural specialist Bowdens.

Watch a video showing the Kelston Toll Road from above: