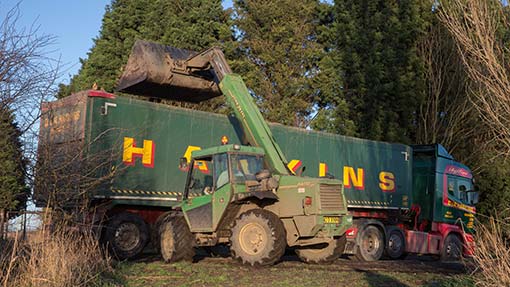 Flood-affected farmers on the Somerset Levels are in need of free haulage of forage from southern counties to help feed their cattle.

Supermarket giant Tesco has led the way, delivering 46 loads of forage aid to flood-affected farmers on the Somerset Levels.

But Ed Ford, vice-chairman of Essex Young Farmers’ Club, said other supermarkets should help out too.

“Tesco have been brilliant. Out of all the supermarkets, they have made by far the most deliveries,” he added.

“Asda has been providing food to keep volunteers fed, which is welcome. But some of the other supermarkets have been looking after their own suppliers or barely helping at all.”

Mr Ford said some farms on the levels were about to run out of silage to feed their livestock and they were in “desperate need of a delivery”.

“We have got thousands of tonnes [of fodder] sitting there. It’s still quite desperate. We really need to move it,” he added.

In particular, Mr Ford said hauliers were needed to deliver forage free of charge from Essex to Somerset.

If you can help with haulage, please contact Jock Muirhead at the farming charity RABI on 07770 160902.

Meanwhile, with more than 11,000ha of farmland ruined by floods and nearly 1,000 farm businesses totally or substantially devastated by catastrophic flooding for the second time in less than two years, the long haul to restore sustainable agriculture to the Somerset Levels and Moors has begun in earnest, the NFU said.

Following lobbying from the NFU, two co-ordinators, who are being seconded from the South West Farming and Wildlife Advisory Group (FWAG), have been appointed to help manage the flood relief effort in the levels.

Funding for the posts has been provided for 12 months by the Somerset Community Foundation, the ARC Addington Fund and, principally, Somerset County Council.

They will take on the day-to-day management of the distribution of fodder and bedding, generously donated or pledged by the agricultural community around the country, and provide help for farmers to access the support they will need to get back into full-scale production.

A spokesman for NFU South West said: “Any further offers of help, particularly from hauliers, would help.

“With the co-ordinators coming in, we hope to beef up the whole operation. One of the first things they will be looking to do is increase the number of deliveries.”

Farmers who wish to offer fodder supplies or haulage services should contact NFU South West offices on 01392 440700 or email south.west@nfu.org.uk

See also Flood-hit farmers – how you can help