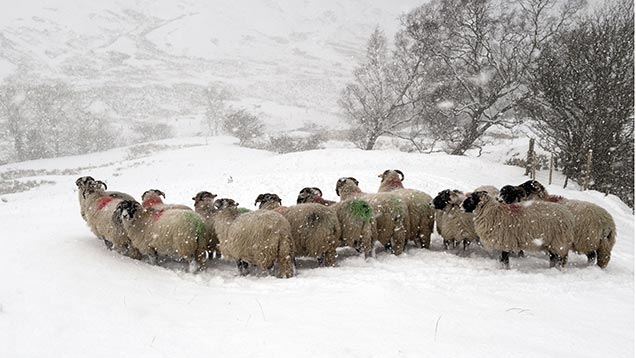 Farmers could soon benefit from improved severe weather warnings and better long-term forecasts thanks to a £97m government supercomputer.

The weather ranks as one of the biggest topics of conversation among farmers and it has arguably become even more common in recent years due to the effect of climate change.

The notoriously volatile British weather makes it difficult to forecast and at times it can seem easier to predict the week’s winning lottery numbers.

Erratic weather patterns experienced by the country, especially in the past five to 10 years, has cost millions of pounds in the loss of livestock and crops.

But more help could soon be available for farmers with the launch of the Met Office supercomputer, which is set to give the UK its most accurate forecasts ever.

The world-leading high-performance computer (HPC) will be 13 times more powerful than the current system used by the Met Office and will have 120,000 times more memory than a top-end smartphone.

The supercomputer will be built in Exeter next year and will be operational in September.

The Met Office said it will deliver a “step change” in forecasting accuracy and will enable forecast updates every hour and the ability to provide highly detailed weather information for precise geographical areas.

It will be able to predict disruptive weather events such as flooding, strong winds, fog and heavy snowfall – which can be the bane of farmers’ lives – more effectively.

The HPC will also give more accurate and precise forecasts of wind speeds, to help farmers identify suitable windows for spraying crops.

Improved forecasts for temperatures and timings of significant drops in temperature, which ultimately affect yield losses, will also benefit farmers.

Scientists will also explore the benefits of adapting the resolution to improve UK winter forecasts out to months ahead, and assessing the specific regional effects of climate change such as floods, droughts and heatwaves.

Met Office chief executive Rob Varley said: “We are very excited about this new investment in UK science. It will lead to a step change in weather forecasting and climate prediction.

“The supercomputer, together with improved observations, science and modelling, will deliver better forecasts and advice to support UK business, the public and government. It will help to make the UK more resilient to high-impact weather and other environmental risks.”

Meanwhile, the Met Office said this week the UK was on course to record the warmest and one of the wettest years since records began more than 100 years ago.