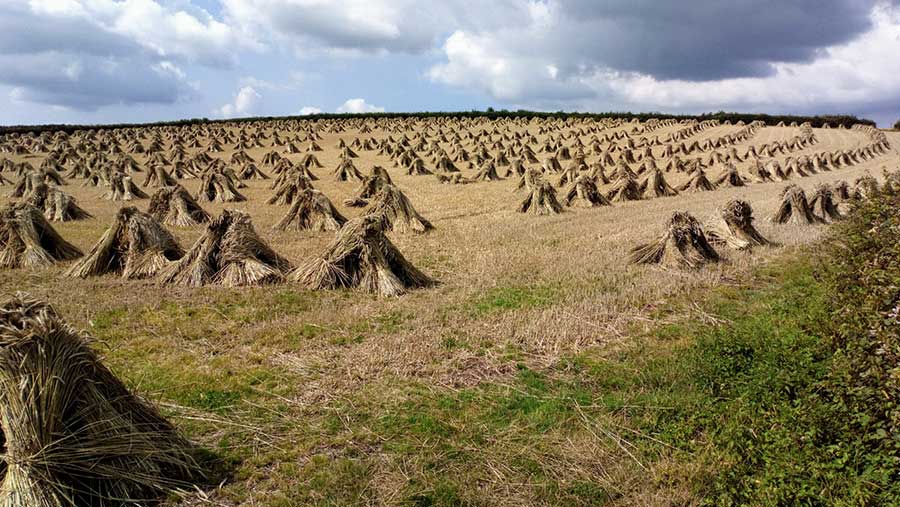 Two poor weather years and a move away from traditional long-stemmed winter wheat have been blamed for a shortage of thatching straw.

The National Thatching Straw Growers Association (NTSGA) says there is a national shortage of good quality straw – whether combed or long straw. Thatching straw is a lot longer than straw from modern wheat varieties.

The association said two successive wet autumns in 2019 and 2020 had caused growers of specialist wheat varieties difficulties in establishing the crops.

The NTSGA said the shortage was affecting the ability of thatchers to source suitable materials to work on roofs of homes and bigger properties, including listed buildings.

Historic England insists upon a like-for-like thatch if the building is listed, to ensure the continuity of the heritage of buildings.

Suffolk-based farmer Paul Watkin, the chairman of the NTSGA, has been growing thatching straw for 40 years.

Mr Watkin said he “accidentally” got into growing thatching straw when he found himself short of storage space after harvest.

“We cut five acres that first year, 1979, of the variety Aquila, which even then was taller than some of the modern varieties available at that time,” he recalls.

“A local thatcher, named Guy Jolly, approached us and said he would buy the straw when it was threshed. My father and I realised there could be a business in growing straw for thatch, rather than for grain.

“Mr Jolly told us he was finding it difficult to find straw in 1980. He paid as much for the straw as the wheat was worth.

“We sourced some taller varieties such as Squareheads Master. Since then, we have grown about 15-20 acres each year and supply four or five customers.”

Mr Watkin says the grain yields are much lower in a heritage variety such as Squareheads Master than in modern wheat varieties. Grain yield is about 3t/ha, roughly a third of a modern variety. But input costs are lower with only 40 units of nitrogen an acre (100/ha) applied and no growth regulator.

He says the value of the straw used for thatching more than makes up for the reduced grain yield. He harvests in a traditional way, cutting the wheat with a binder 10 days to two weeks ahead of when it would normally be combined.

“This is important to ensure the toughness of the straw. It must be slightly green and the grain must be cheesy ripe,” he explained.

The wheat then remains “stooked” or stood up for a week to 10 days until it is dry enough to cart and stack. It is threshed at a later date.

Mr Watkin believes there is an opportunity for smaller farmers who have access to binders and threshing equipment who might be interested in growing a few acres to increase supply for the thatching industry.

“Small farmers may even know a thatcher in their area who may be interested.” he suggested.

Karen Crouch, founder of the Thatch Advice Centre, which offers advice on thatched properties, said: “The straw shortage has had a real and marked effect on thatchers’ ability to maintain clients’ properties this year.

“Everyone is awaiting the new harvest with anticipation. Many thatchers have straw work backed up and even clients with waterproof sheets on their roofs.”

Both the NTSGA and the Thatch Advice Centre are promoting the need for more farmers to grow thatching straw.

“It has a good value nowadays and is also necessary for maintenance of our traditional combed wheat reed and long straw properties,” Mrs Crouch said. “Our heritage properties need the heritage varieties grown in order to preserve them.”

Meanwhile, the Thatch Advice Centre is urgently looking for a farmer with the right equipment to harvest a crop of about 2.8ha of Maris Widgeon for thatching in the Staffordshire area. For further details email info@thatchadvicecentre.co.uk

Thatch Advice – Looking for thatching straw?
Standing crop of Maris Widgeon approx 7 acres, needs a new home & someone to harvest it… Stafforshire Area If interested get in touch asap for more details Via email or phone. please info@thatchadvicecentre.co.uk Pic for attn pic.twitter.com/nz2aUkwdb6