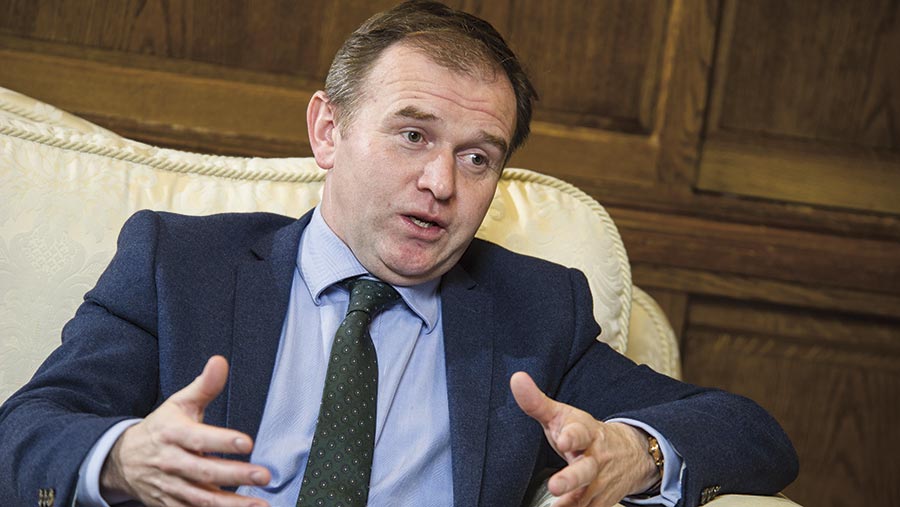 Tory pledges include maintaining the current level of farm support until 2022 and policies that focus on “productivity, profitability and sustainable farming”.

Mr Eustice, who is standing for re-election to represent the Cornish constituency of Camborne and Redruth, also pledges to press ahead with rolling out badger culling more widely to combat bovine tuberculosis.

Growers will welcome his commitment that glyphosate is “here to stay” after Brexit. But there are doubts that neonicotinoid seed treatments will make a return, even after the UK leaves the European Union.

What does a good Brexit deal look like for farmers?

A good Brexit deal would give us the comprehensive free-trade agreement we want – so we still have access to the European market. And it would probably give us an understanding about how we deal with issues such as pests and diseases – often a common challenge across Europe.

We would want to have some sort of concordat that would address those two key issues. But when it comes to domestic policy, obviously that is an issue in future for the UK government – it is not an issue relevant to the Brexit negotiations itself.

Your manifesto guarantees the current level of farm support for an additional two years until 2022 – why is that?

It is incredibly important we make any changes gradually and there is an orderly transition from the old CAP to the new policy. I’ve always been clear that we should have a funded agricultural policy – but that in the long term we could spend that money far better.

For me, protecting the budget for five years – for the lifetime of the next parliament – is crucial because it enables us to reassure farmers that we intend to have a funded agricultural policy.

Can we really expect a “strong and stable” agricultural sector under the Tories? Coming out of the CAP is going to mean massive upheaval, isn’t it?

I don’t think it does. We’ve made clear that in the first instance the Great Repeal Bill is going to bring across all EU legislation, including many of the elements of the CAP.

We can then gradually change things – switch off the bits we don’t think work, change the regulatory environment, change the enforcement culture – and gradually start to direct money to supporting productivity, profitability and sustainable farming.

How long will the transition to the new system take? Can we do it within the lifetime of the next parliament, by 2022?

As our manifesto makes clear, we envisage possibly some sort of totally new agri-environment scheme for the following parliament after 2022.

But probably the reality is that very little, if anything, would change until we actually leave the EU in 2019.

And I would then envisage perhaps between 2020 and maybe 2025 a gradual change in the way we support agriculture so we emerge with something that is much more focused on profitability, productivity and sustainable farming.

Can you guarantee that UK farmers will have access to an adequate supply of overseas workers?

We’ve obviously had schemes before – like the Seasonal Agricultural Workers Scheme. And it is quite possible for us to put in place systems of work permits to ensure we’ve got the labour we need.

Badger culling to combat bovine TB hasn’t been rolled our as quickly as many farmers would like. What can we expect to see on that score if the Tories are re-elected?

We have our 25-year strategy on TB and we will continue to implement it. We are the only party that will implement a badger cull in full as part of a coherent strategy to eradicate TB.

We added a number of [cull] areas last year and we’ve have a number of candidate sites this year. If the government is re-elected, one of the first things it will do is give consideration to which sites we believe are best placed to commence badger culls this year.

Yes they can. First of all, we’ve talked about the possibility of financially incentivising higher standards in animal welfare rather that always raising the regulatory bar.

When it comes to regulation, we have to recognise the limits in terms of how far you can go given that  competition is increasingly global – but that doesn’t mean you couldn’t and shouldn’t incentivise higher standards of animal welfare through grants or payments.

How will you get the balance right between food imports and self-sufficiency?

When it comes to discussions on trade deals for the future with what are now third countries – countries outside the EU – it is quite possible to stipulate that the food you allow to be imported is farmed at standards that are at least equivalent to the types of standards we have here in the UK.

That is quite a well-established norm when it comes to trade deals.

Will we see the return of neonicotinoids under a post-Brexit Tory government?

We always follow the science. A few years ago, when there was an emergency authorisation, the expert committee on pesticides having assessed it thought there was a case for it. We agreed it, even though it was controversial.

Since then, there have been applications for emergency authorisations which the committee recommended against, so we refused it.

There has been some science that has within the past two years probably strengthened the case against allowing neonicotinoids to be used widely again, but we keep all of this under close review and we will follow the science.

Is glyphosate here to stay after Brexit?

Yes. It is one of the most studied chemicals there has ever been and the European Food Safety Authority has made clear that they believe it is safe. We agree with that opinion.

We have consistently argued for that in the EU and therefore if we were to leave and have our own science-based approach, then yes, we would authorise glyphosate if the science still suggested it was safe.