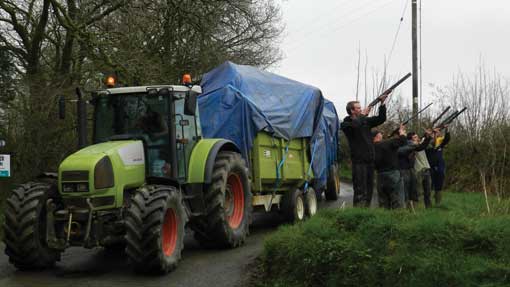 Mechanical breakdowns and police have turned a tractor journey to southern France into a three-day ordeal for a North Devon farming family.

For two nights, the three drivers, Michael Jordan, 40, his dad, Reg, 67, and co-driver Damien O’Meara, 24, had to sleep in their tractors.

The team also had to leave one of the three tractors, with a trailer, en route because of punctures.

The 400-mile journey began late on Saturday 5 April. The convoy of three tractors left the family farm in the hamlet of Langaford, near Holsworthy North Devon, to drive on to a new life in a chateau and 1,000-acre farm in southern France.

Friends fired a shotgun salute (pictured above) to say goodbye after a crowd of well wishers turned up to wave them off.

The men drove their heavily-laden tractors to Plymouth and caught the overnight ferry to Roscoff. Earlier Mike had joked “we’ll start annoying the French as soon as we get across there”.

By 10am on the Sunday (6 April), the convoy, which had a top speed of 25 mph, had already begun to attract the attention of French police, who brought it to a halt to check documents and ask questions.

The gendarmes fined them £270 for driving on a dual-carriageway.

A family member said Mike’s wife, Clarissa, and their two sons had gone ahead in the morning with their horses, dogs and the family parrot to their new farm near the city of Angouleme.

She reported that one of the tractors had to be dumped because of punctures and they ran out of tyres. Another one developed an oil leak and the other’s brakes had “been dodgy”.

The three men finally arrived at lunchtime on Tuesday 8 April, said Clarissa, but had to regroup and then set out again for hundreds of miles to fetch the tractor they had left behind .

“They’ve had to drive on all the back lanes because the authorities are so strict. They can’t even drive on the green routes.”

The one consolation was that the weather was nice enough for her sons, Max, who’s eight, and Rocco, six, to be able to use the swimming pool at their new home.

But she confessed that she had mixed emotions when the family packed up Langaford Farm, where Mike had grown up and where Reg had spent the past 50 years.

Between them they’d built up a 400-strong herd of dairy cattle, nearly all of which were sold at Holsworthy market before their departure.

The family now plans to grow a variety of crops and run a holiday business. Clarissa said: “I’ve got mixed emotions. I’m excited, but also wondering if we’re doing the right thing for the kids.

“But why not go for an adventure. It’s going to be a big adventure. I’m going to miss my friends and family, and that same old routine. But we’ll have to learn to get on with it. I’m looking forward to good weather, a bit drier, and we both like a challenge.

“I hope it’s going to be a better, more enjoyable life, not working day and night in the cold and wet all the time, and having more time as a family.”

Mike said this was the final act in a plan they’d thought about carefully: “It’s the right time for the kids. If we left it much longer the kids would have lifelong friends here and wouldn’t want to go with us.

“I fancy a change. There’s a lot of building to do where we’re going. I’ve got 25 good years left for work with a bit of luck. It’s time for something different.

“We’ll be arable farming, no animals apart from the horses, two dogs and the parrot. And no doubt I’ll get up to other things when I’m there.”

About the journey he said: “It’s a bit of excitement. I’ve no regrets at all.”