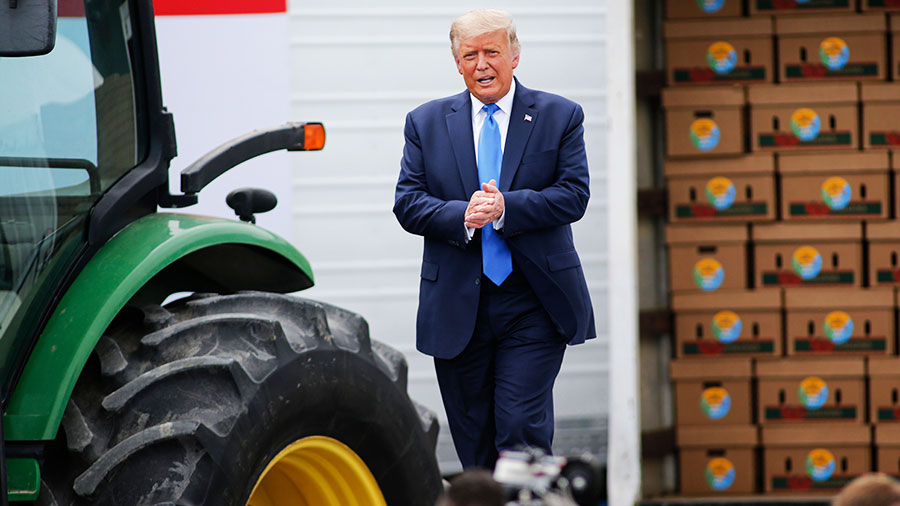 Rural voters across the United States are expected to give their overwhelming support to president Donald Trump amid concerns that a Democratic presidency could lead to higher taxes and tougher environmental regulation for farmers.

While nationwide polls suggest former vice-president Joe Biden will win the race to the White House on 3 November, industry surveys suggest more farmers will be voting for president Trump than in 2016.

Despite a presidency which has seen US agriculture hit by trade wars and increased volatility, a poll by rural publication Farm Futures found that 75% of US farmers plan to back president Trump, up from 72.6% four years ago.

See also: US farmers on brink of bankruptcy as coronavirus hits hard

In some states those figures are even higher, with 82% of Iowa farmers and 87% of Minnesota producers pledging to back the incumbent president, separate polls by Farm Journal found.

While United States Department of Agriculture (USDA) figures indicate farm incomes have increased by 65% to $102bn (£78bn) under the Trump administration, those statistics don’t necessarily reflect a successful four years for US agriculture.

A third of incomes are now made up of government support, compared to 21% in 2016. Trump has given the farming sector $28bn (£21bn) to subsidise lost incomes created by trade wars with Mexico and China, which led to pig prices being slashed by $10/head (£7.67/head) and soya exports greatly reduced.

The dairy sector also struggled, with a record 9% drop in licensed dairy herds in 2019 as farmers dealt with declining prices and oversupplied markets due to reduced exports.

Yet despite some of the headaches president Trump brought the industry, concerns over Joe Biden’s proposals for US agriculture have left some already bruised producers worried.

In an election campaign that has been relatively thin on solid farm policies from either candidate, Mr Biden’s “Plan for Rural America” has come under the spotlight — largely thanks to its green goals, including achieving net-zero emissions for US agriculture.

For farmers such as Garrett Davis, a pig farmer from central North Carolina, it’s a potential new challenge his business could live without.

“Things might have been volatile under Trump, but we feel like we’ve survived the worst — particularly in terms of Covid and the issues we had getting pigs to processing earlier in the year,” he said.

“Our concern now is that instead of allowing producers to focus on business, Biden would be more concerned about the environment and we’ll be under a new set of pressures that we won’t survive.”

The Democrats’ approach to estate taxes is also a concern, he added. Biden aides have said he would support returning to a previous system which would lower exemptions and raise overall rates.

For some farmers, however, Biden’s proposals could offer some welcome improvements to rural communities, particularly in terms of investing in rural broadband and healthcare.

His pledge to focus on small family farms, support new entrants and invest $400bn (£307bn) into clean energy research is also appealing to farmers keen to diversify their operations and markets after a tough few years.

“The domestic ethanol market is hugely important to our business, so the focus on green energy offers us a lot of potential,” said Elaine Weir, who grows maize and soya beans with her husband Paul in Jackson, Iowa.

“There might be more of a focus on the environment, but if we’re paid for what we do in terms of sequestering carbon and so on, then it’s an additional opportunity for us rather than something to worry about.”

No rush to strike UK-US trade deal if Biden wins

A new administration in the White House is unlikely to improve the UK’s ability to negotiate a free trade deal with the United States, according to an agricultural economist.

Ian Sheldon, a trade and policy expert at Ohio State University’s College of Food, Agricultural, and Environmental Sciences, said Joe Biden had indicated that new international trade deals would not be a priority if he gets elected.

Instead, the Democrat administration’s focus would be on making major investments in the US in infrastructure, jobs, training and education.

“Biden’s essentially adopting a position of America first,” Prof Sheldon said. “Trade with the UK won’t be very high on Biden’s agenda — I don’t think we’ll see any movement on a trade deal, at least in the first 100 days.”

Any early conversations which do take place on trade are likely to focus on China, with Biden keen to resolve trade war issues which have left US soya bean exports down 60% from 2016-17 levels.

While Republican officials have said Trump would push for improved trade terms with partners including the UK if he were re-elected, it would be unlikely to result in a beneficial relationship for the UK, Prof Sheldon added.

“If Trump wins he will just bully the UK,” he said. “The US’s approach to trade has been power-based bargaining, and I think Trump would take the route of arguing that US beef and poultry are safe and will refuse to change his tone – no matter how friendly Boris Johnson might think the two of them are.”