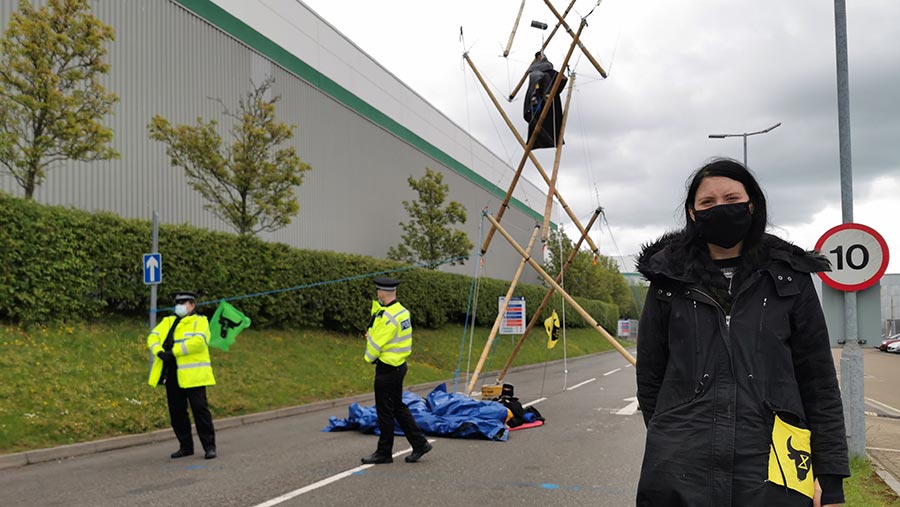 About 50 protesters from Animal Rebellion used trucks and bamboo structures to prevent access to depots in Basingstoke, Coventry, Hemel Hempstead, and Heywood in Greater Manchester.

According to Animal Rebellion, the group blocked the four sites for a total of 95 hours on Saturday and Sunday (22-23 May).

Fourteen people have been arrested on suspicion of aggravated trespassing, including eight at the protest in Basingstoke and two at Hemel Hempstead.

Chief inspector Matt Reeves, of Hampshire Police, said: “Everyone has the right to free speech and protest. However, officers will take necessary action against the few who deliberately choose to act outside the law.”

Animal Rebellion tweeted on Sunday evening: “All rebels have been arrested! McDonald’s UK stores are shutting across the country due to lack of supplies and it looks like it’s only going to get worse for them!”

And it warned: “This is direct action and it doesn’t end today.”

“We are assessing the impact on deliveries to our restaurants and to menu items. We apologise to our customers for any disappointment caused.”

At the protest in Basingstoke, the activists handed out leaflets claiming McDonald’s “should take responsibility for the destruction, animal suffering and harm to people that they cause”.

The group said industrial meat “is the single biggest cause of deforestation globally” and cited figures from the UN Food and Agricultural Organization which attributes 14.5% of the world’s global greenhouse gas (GHG) emissions to livestock production.

In the UK, however, government figures for 2019 show that agriculture accounts for about 10% of the country’s GHG emissions, of which 5.7% is attributed to the livestock industry – far lower than the transport sector (27%) and energy supply (21%).

Animal Rebellion has come under fire on social media from members of the public. One said its “selfish” actions had prevented McDonald’s workers from doing their jobs. Others highlighted how British farmers were working hard to tackle climate change.

The National Farmers Union (NFU) has set its own target for the agricultural industry in England and Wales to reach net zero GHG emissions by 2040 – which is 10 years ahead of the UK government’s nationwide target.

“In the UK, all their beef comes from hardworking British and Irish farms and is some of the most climate friendly beef in the world.”

“The beef burgers are sourced from the highest welfare standards in the world. Soya is hardly used in this production, if any.”

Another said: “McDonald’s use British and Irish beef. When I last looked, we do not have any rainforests.

“British beef emissions are half the global average due to good grass-fed farming. Take your diesel Transit and protest where meat products are used from farmers who don’t care ie abroad.”