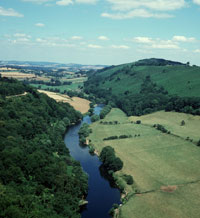 Floodwater has carved a huge trench 25m wide trench in a barley field in County Durham.

The trench appeared last weekend on land farmed by Hougall College after storms caused a nearby river to flood.

The trench, nick-named the Grand Canyon of Durham, is hundreds of metres long and up to four metres deep.

It is estimated that the water carried into the river up to 12,000 cubic metres of soil, weighing 15,000 tons.

You can view pictures of the gully here.

Or Watch the BBC video below: