The next generation of farmers are young, passionate, experimental and brave – but most importantly, they are succeeding.

The Exmoor Hill Farming Network is one organisation that has prioritised supporting young agricultural enthusiasts by creating a peer support Next Generation group.

Farmers aged 30 and under are welcome, and the group currently has 100 members, a mixture of farmers’ sons and daughters and young people trying to start a career in agriculture.

Watch the video and read the full report below

Network chairman Dave Knight explains that the idea came after a survey the organisation completed a few years ago identified that Exmoor had a high percentage of young people in farming.

“One of the key points we found is that Exmoor actually has, on average, a younger farmer age, running, on average, larger farms,” Mr Knight says.

“Then within that there are a huge number of young people who are coming back into the area and wanting to farm. It was absolutely vital that we did everything we could to help facilitate them.”

Creating and building the group was a challenge, network officer Katherine Williams admits, especially in an area with a tight-knit young farmers’ club community, which they didn’t want to infringe on. 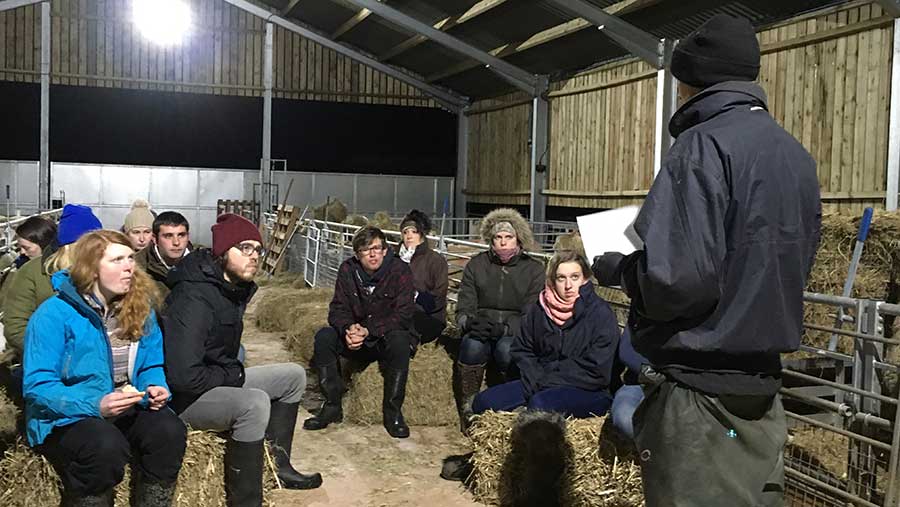 After trialling several unsuccessful ideas, the network now runs events where it secures a farmer as host for, say, a farm walk, and then invites the local YFCs and the Next Generation members to attend for free.

“The members told me they wanted assistance with training and things like tractor and trailer tests, rather than group learning events,” Miss Williams says.

“What we’ve found is that getting them out and about on each other’s farms, or farms where they can learn from others who might be slightly older, works really well because they feel in their comfort zone.”

Learning from each other

Meeting new people, learning about innovative things, putting others’ ideas into practice and socialising with friends are all parts of the experience.

Sarah Eveleigh, 28, farms at West llkerton on Exmoor with her family. Since joining the Next Generation group she has completed pesticide training courses and her trailer test, attended farm tours and gained “all the bits of paper you need to be employable”. 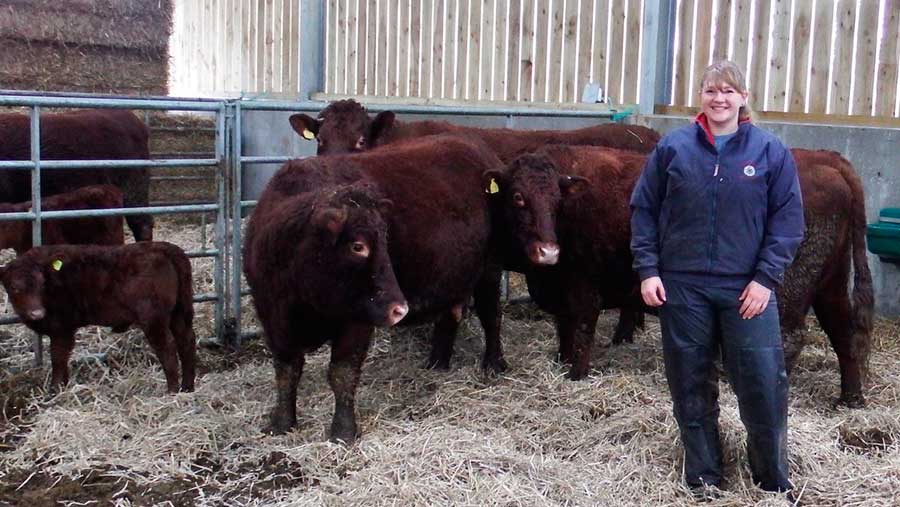 Getting people off their own farm and allowing them to talk about their problems is really important, she says.

“Some people, if they’re just in their little farming bubble, think ‘why is it all happening to me and only to me?’ But if you get out and talk to people, actually everyone’s had that problem this year, and it takes a bit of weight off your shoulders and you can find out how other people are dealing with things, so it’s really helpful to share the load.”

Beef and sheep farmer Sam Smyth, 28, says the Next Generation group attracts enthusiastic young farmers looking for new ideas to make their farms more efficient and he believes everyone can learn from their peers. 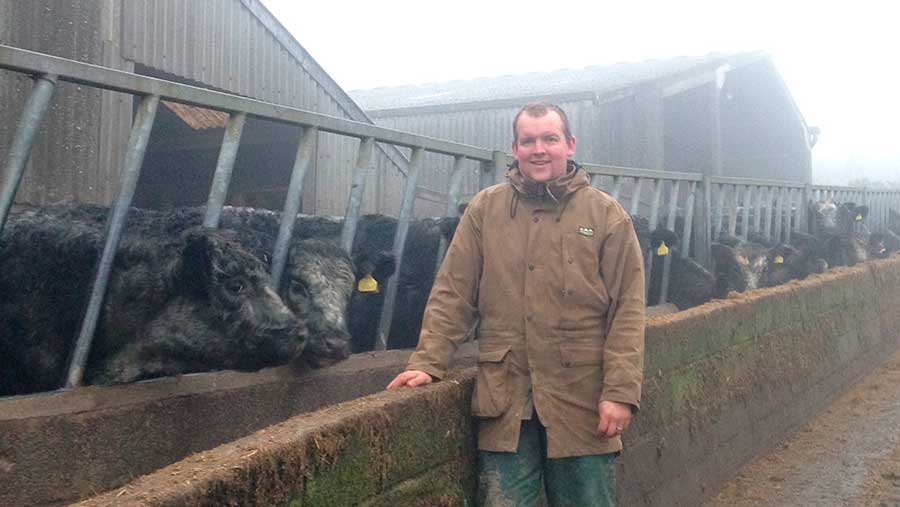 “We have to be prepared to try new things to keep the farming industry going. It’s good for us young farmers to have these opportunities,” he explains.

“Due to rural isolation, without groups like this there would be a lot of talented and knowledgeable people unable to get together to share their experiences.” 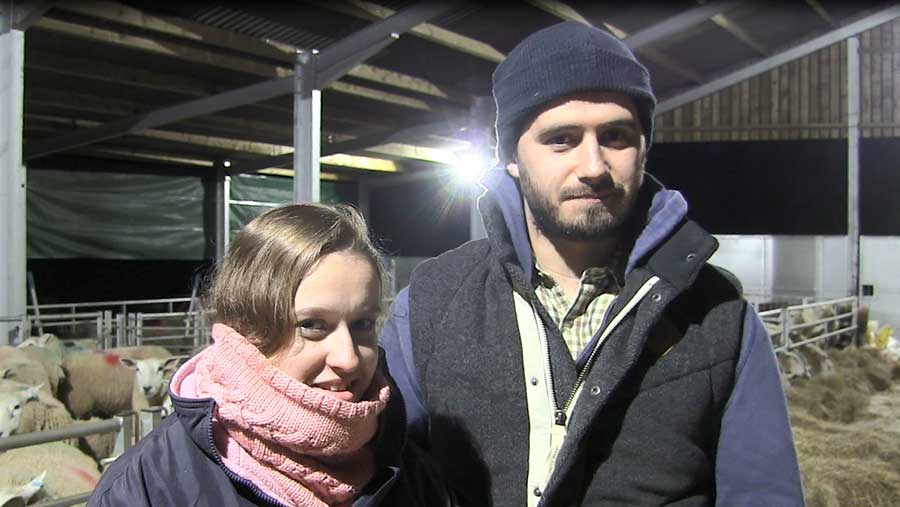 First-generation farmers Kim Sharpe and Will Giles farm beef and sheep in Minehead and joined the Exmoor Hill Farming Network two years ago.

They became members of the Next Generation group hoping to meet other young farmers, discuss their difficulties of getting into farming and learn from others’ experiences.

The couple attend most of the events that network officer Katherine Williams organises, not just the ones about sheep or cattle, to broaden their farming knowledge.

They find the information evenings, which range from lambing preparation to artificial insemination and rural development, the most useful.

Ms Sharpe, 23, and Mr Giles, 30, currently rent land and are trying to get a farm tenancy, but are finding it difficult, having come “second place” a number of times. They find the network useful for making contacts, hearing about land opportunities and general advice.

Ms Sharpe says: “We’re just trying to get that foot in the door. We know what we’re doing, we’re working well and we’ve been told that we’re doing it well. It’s just having someone to put that faith in you to enable you as a first-generation young farmer to get into things.

“It’s about getting our name out there and getting young farmers as a whole out there. We are the next generation that has to work through whatever’s going to happen with Brexit, and the future is in us.”

Mr Giles believes there is a gap in the market, with many farmers retiring without anyone to take on their farms, and he wants new people to be able to come into the industry.

He says: “They need to be able to build a future because the farming network is still needed. Anything that can help that benefits all of us.”

Staffordshire farmer Richard Bower is the former chairman of the NFU next generation policy forum, a group of members under 40 who want to be involved in political decision-making.

Mr Bower says there are lots of opportunities available for young farmers now, and he advises getting off farm regularly and engaging in as many events as possible to learn new skills, share ideas and collaborate.

He adds: “The National Federation of Young Farmers’ Clubs has groups locally, in some areas there are events specifically to discuss what young people want from agricultural policy post Brexit, and some agricultural societies now have next generation groups, like in my area.

“The way we farm now is different to the past and how we farm in the future will be different, so the more ideas you have in the future, the better.”

Mr Bower has identified other ways for young farmers to find support in agriculture:

Fresh Start land matching service The Land Partnerships Service matches young farmers with landowners/farmers who do not have a next generation to take over their farms.

Under 40s Fruit Growers A forward-thinking group who go on international study tours.

The Farmers Club Under 30s A fantastic group who have guest speakers at the Farmers Club in London and run farm walks nationally in the spring and autumn.

The Henry Plumb Foundation Provides funding and a mentor for young farmers who have a project idea.

A Focus on Nature (AFON) A group of young farmers/stakeholders who discuss the environment.

National Sheep Association’s Next Generation Encouraging and supporting the sheep farmers and service providers of the future.

NFYFC has its own Agricultural and Rural Issues (AGRI) steering group for members, which is one of five steering groups that feed in ideas to the national council.

Chairman James Hutchinson believes that to succeed in farming young people need determination, an open mind, a good work ethic, common sense and a passion for the industry.

“While we know financial support can be difficult for people who are interested in farming, there are opportunities out there and we recommend exploring all of what’s on offer,” he says.

“Agriculture is a massive sector and needs people with technology and research skills as we work increasingly with digital machinery and new technology.”

Typically, these members have moved into the area and bought smallholdings, but do not necessarily want to be identified as smallholders. Their farms may not be their main source of income, but they are running them with the aim of making a profit.

Network chairman Dave Knight explains: “That group has been a success and we’ve managed to engage with people who I don’t think we otherwise would have, because they probably feel a little bit set aside from the main farming community.”

The peer support groups are designed to target the particular needs and interests of their members, with activities and events planned accordingly.

When asked what event would really benefit them, the micro-farming members suggested a rundown on how to use the local market – perhaps an obvious task for those who have used them day in, day out for years, but a daunting prospect for others.

The group were shown round the local, farmer-owned Cutcombe Market by an auctioneer who explained how everything worked, from driving in to unloading stock, booking in and the auction process.

Mr Knight says: “Suddenly it’s not this big frightening prospect of driving into market with your stock with all the other local farmers. That’s a brilliant example of something we can do.”