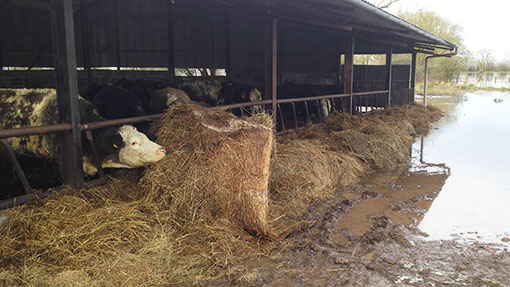 Beef producer James Winslade travelled more than a mile by boat to visit the farm his family was forced to abandon to the Somerset Floods.

It was the first time Mr Winslade had been able to visit the farm for three days. He made the journey through flood water up to 10ft deep over fields, hedges and fence posts to retrieve his farm accounts and bills from his parents’ house.

All 550 cattle were evacuated from Mr Winslade’s farm as flood waters rose. He has had to sell 90 of them. The rest are being looked after at seven local farms. “It’s a logistical nightmare,” said Mr Winslade. “I haven’t yet been able to get to all the farms, but I really need to.”

Evacuating the cattle involved a treacherous five-mile journey along flooded roads. It had to be completed using tractor-trailer convoys because the water was too deep for lorries. At one point, a tractor and trailer slipped into a ditch and almost overturned. Luckily, there were no injuries.

“We couldn’t get lorries on to the farm, the water came up so quick. You can’t get 4x4s down here any more either. We’ve been shipping cattle out using tractors and trailers and loading them on to lorries on the main road.”

Some of the farms looking after the cattle don’t have the facilities to machine-feed livestock. “You have to carry it in by hand,” says Mr Winslade. “They haven’t got feeder wagons or anything like that, which makes it even more difficult. I can’t thank them enough.”

Mr Winslade estimates he has lost some 7,800 big square bales of hay and 3,000 bales of straw. Silage on the farm has been ruined by flood water too, he added. Cattle handling facilities and sheds now empty of livestock are almost waist-deep in water.

It took four or five hours for Mr Winslade to visit half the farms last weekend. He says he is determined to see the others. “I need to see them all. Some of the farmers I haven’t ever met them before. Other cattle are on arable farms.”

It’s taking time too to calculate rations using unfamiliar feedstuffs and forage donated from farmers across the country. Donations so far include haylage, silage and sugar beet from as far away as East Anglia, the East Midlands, Yorkshire and Scotland.

Having livestock at different farms adds other extra costs. “I’ve got one cow losing weight like butter before the sun, I’ve got a lame bull on another farm and I’ve got another problem with a calf. So we sent the vet to three different farms this morning, which is going to cost an absolute fortune.”

Photographs and even aerial television footage fail to convey the expanse of water which has engulfed this part of Somerset. In total, some 12,500ha of the levels are believed flooded. All of Mr Winslade’s 340ha farm is likely to remain under water for weeks if not months.

“Until you come down here and go out in a boat, you can’t comprehend what is happening,” he told Farmers Weekly. “People drive along the M5 motorway past Bridgwater are completely unaware of what is going on just half a mile or so away.”

In the village of Moorland, bull-dozers have been drafted in build emergency defences against rising water. “It’s like a war zone in there. The slews and pumps – they’ve dug up roads and filled in ditches and bulldozed fields. It’s just carnage. You would recognise it as a village.”

Mr Winslade’s wife Jenny works as a small animal vet. The couple have three young children – George age nine and four-year-old twins Jack and Harry. Having moved out of the family home, the family are living in temporary holiday accommodation.

“We’ve been really strong. The twins have been hard work but they’ve also been amazing. We’ve actually come together more as a family unit. But everybody is knackered. We’ve been fighting this for six weeks on minimal sleep.”

See also: The farming community – reaction to the Somerset floods

A 15 minute school run has now become an hour and a half car journey. Then there are other domestic issues to deal with – such as diverting the post and stopping the council tax on the house. A tank of heating oil floating in a nearby field will have to wait.

“If it was just my house flooded, it would be much easier to just move the furniture upstairs and move out. I know it means upheaval. But when you are faced with having to move livestock and losing everything else with it, the nightmare doesn’t end. We are in the lap of the gods.”

See all of the news, videos and photo on the floods