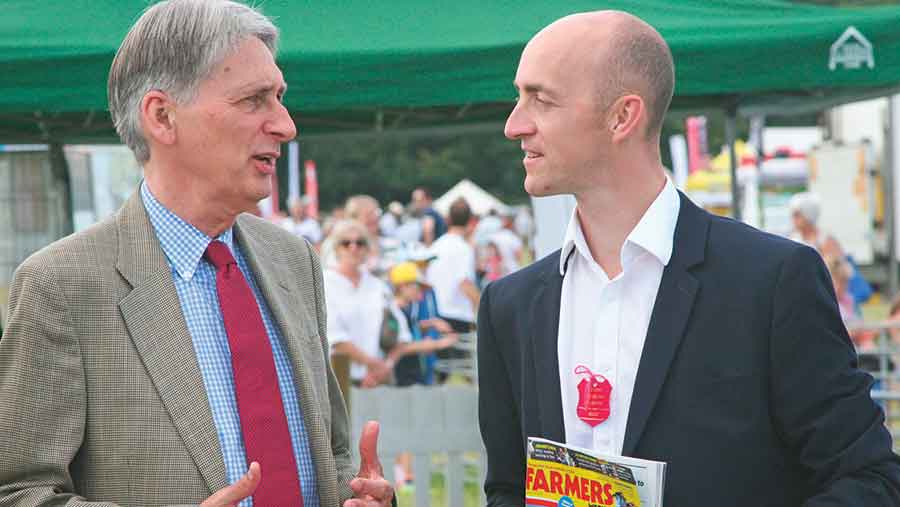 In a week in which the government set out more details of its post-Brexit objectives – including plans for a short transition period – Farmers Weekly news editor Philip Case caught up with chancellor Philip Hammond at the Chertsey Agricultural Show to explore his vision for Brexit and farming.

Q.  Will we definitely be leaving the EU single market and customs union on 29 March 2019?

A. Yes, we will, because they are intrinsic parts of the European Union. But that doesn’t stop us having a customs co-operation arrangement with the EU. For example, Turkey is not in the customs union, but has a customs agreement with the EU.

See also: ‘Farm businesses must limber up for Brexit’

We, in the transition, could do the same. We could have an agreement that allows us to trade on broadly similar terms to what we do now, applying the external tariff on behalf of the EU with tariff-free trade between the UK and the EU, while we negotiate our long-term arrangements.

Q. Can you be specific about what a transitional agreement will mean for farming?

A. No, because any kind of transitional agreement will have to be negotiated with the European Union.

The debate that has been playing out over the past few weeks is whether there is a consensus in the government for a transitional agreement. The message now is that there is consensus.

Q. Are you confident we will be able to strike a free-trade agreement with the EU?

A. I think we will. Yes, it’s obviously subject to negotiation and there will be some give and take. Some people have been talking as if a negotiation is no more than setting out your desires, press the button and that’s what happens.

Of course, it’s not like that. We won’t get everything we set out to get. We will have to engage in some give and take. But I am pretty confident we will be able to do that on a sensible basis and end up with a result that will be acceptable to us.

Q. The government has been praised for committing to keep the farming envelope the same until 2022. How will that money be spent?

A. We have protected the envelope. That’s the Treasury’s bit. But obviously there will need to be a discussion about what our priorities – as opposed to the EU’s – are after 2019.

That will be an opportunity for engagement with the [farming] industry, with environmental groups, with consumer groups and Defra, to decide what we want to do differently.

There is a question about to what extent we want to get ourselves out of line with what’s going on in the EU, or whether we want to keep ourselves broadly equivalent.

Obviously, there will be some benefits to reducing levels of regulation. But equally we may find that some of the market access we would want is not available to us unless we are broadly compliant.

Q. Are you positive that we are going to get a good outcome?

A. I am pretty optimistic. There are lots of things that could get in the way. But if we conduct ourselves sensibly and with a clear focus on what matters, I think we can get a good outcome.

For most people, that will be one that leaves them certainly no worse off and ideally a bit better off. The key thing is to keep this economy motoring, to keep standards of living rising.

Q. Are farmers in for a rocky ride?

A. No. We have challenges ahead, but we know what they are. The key thing is to go into those challenges with our eyes open, driving carefully and cautiously ahead; no eyes shut or jumping off a cliff.