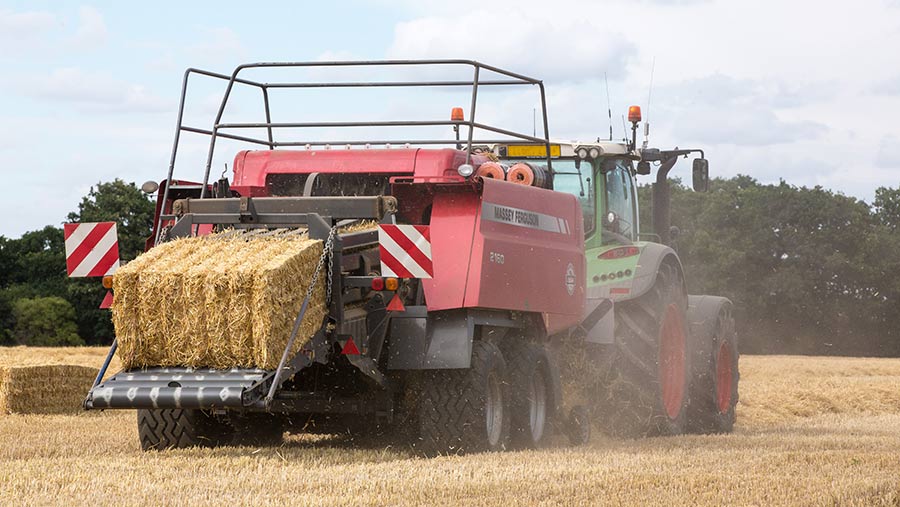 Arable farmers are baling straw rather than chopping it to help livestock producers facing a shortage of feed and fodder.

Vast quantities of straw are being baled in East Anglia and transported hundreds of miles to drought-hit livestock farms in the north and west of England.

Straw prices continue to climb amid growing concern that high temperatures and lack of rain this summer will result in severe forage and bedding shortages this winter.

Hertfordshire farmer and NFU vice-president Stuart Roberts said he was baling all straw at home this year – and offering it to livestock farmers further afield.

One load had already been transported to Northumberland, he told Farmers Weekly.

My contribution to help the livestock farmers. Come on guys please follow my example, I’ve not baled for many years but we’re in this together. #YourHarvest #farmershelpingfarmers pic.twitter.com/1F63XjPcz9

“We have to all work together in agriculture and help each other,” he said.

The straw was destined for Cumbria and other areas to help livestock farmers.

To all my fellow farmers out there. So far 2018 has been a pretty tough year for all weather wise but if you are a livestock farmer short of feed/bedding please don’t bury your head in the sand and speak up to secure what you need. pic.twitter.com/wtSiQHdd9U

The NFU has also reopened its Fodder Bank initiative which matches farmers who have excess straw and fodder with livestock producers in need of it.