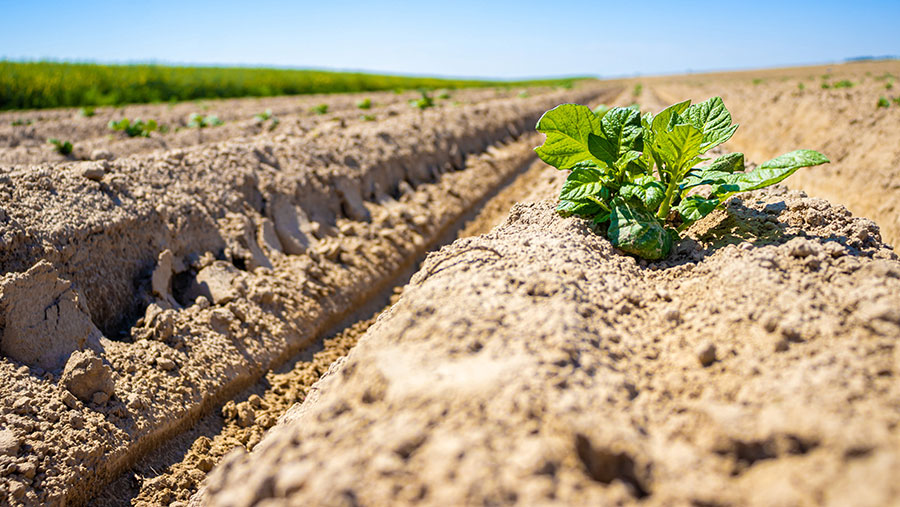 Scottish growers have been urged to take extra care with crop irrigation following a prolonged dry spell, which has hit water supplies.

The Scottish Environmental Protection Agency (Sepa) said the threat of water scarcity had increased in June, particularly in northern and eastern areas.

The country as a whole recorded half the normal rainfall levels in March, with sunshine levels up by almost 170%.

See also: So you want to… build a reservoir?

The traditionally wetter areas in the West recorded as little as 20% of the norm, while the drier eastern parts saw just 75% of the average.

April and May were wetter than average, but dry weather has returned this month, according to Sepa.

In its latest water availability report, the agency elevated Wick and Thurso in the North to “alert” status.

The raised threat of water scarcity means growers in the area should take extra precautions when irrigating land.

Sepa said growers in this zone should check equipment, avoid over-spray, use trickle systems and irrigate at night to avoid evaporation.

Growers should also take extra care to repair any leaks in pipes, tankers or other equipment.

A Sepa spokesperson said groundwater levels had fallen and were very low at some monitoring locations.

In the south of Scotland, the Esk, Annan and Dee catchment areas have been raised to “early warning” level. This is due to a combination of dry ground conditions, low rainfall and low river flows, the spokesperson added.

Nathan Critchlow-Watton, head of water and planning at Sepa, said: “There is still a broadly East/West split in the risk of water scarcity and we are continuing to monitor the situation closely.”

Aberdeenshire seed potato grower Mike Wilson said he was becoming concerned, as conditions had been dry with just 20mm of rain so far in June. The normal June average rainfall for the county is 93mm.

“We are always hoping for rain, but it is a crucial stage for the seed potato crop now,” said Mr Wilson.

“The crop is at tuber initiation so we need the rain to get the tuber numbers up and achieve good yields,” he explained.

Moisture is also necessary at this time of the year to avoid scab.

“It’s important to avoid common scab, particularly for exports, where there is a nil-tolerance among buyers,” Mr Wilson added.

“While it’s not as dry as last year, we are starting to get a bit concerned,” he said