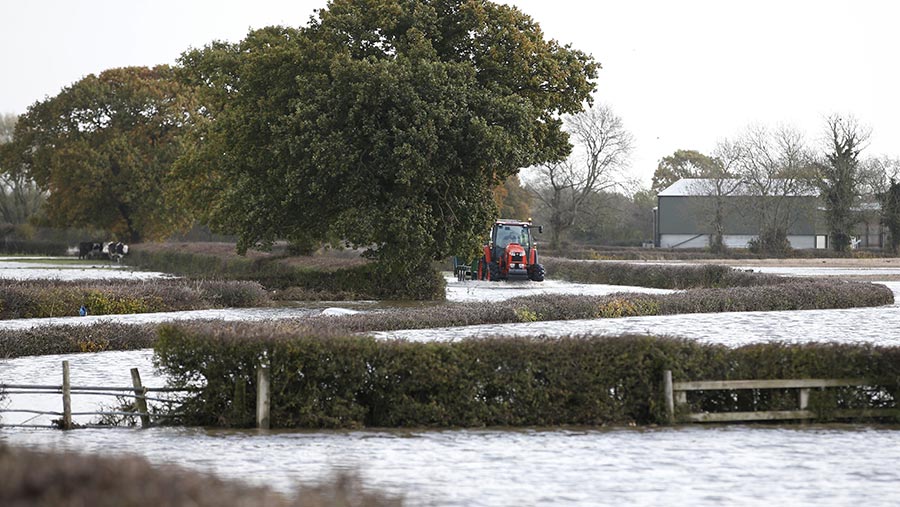 Flood-hit farmers in northern England will be able to apply for up to £25,000 in government grants to help them get back on their feet.

The government announced on Wednesday (13 November) it will extend its Farming Recovery Fund to support farmers badly affected by flooding across Yorkshire and the Midlands.

Through this scheme, farmers and land managers who have suffered uninsurable damage to their property will be able to apply for grants of between £500 and £25,000 to cover repair costs – whether that’s clearing debris or recovering damaged land.

Find out if you are eligible and how to apply on the Defra website. Farmers have until until 31 March 2020 to submit applications.

Defra secretary Theresa Villiers said: “My thoughts go out to all those affected by the devastating flooding across Yorkshire and the Midlands.

“We are providing more funding to support farmers impacted and help local communities get back on their feet.”

Tim Breitmeyer, president of the Country, Land and Business Association, said the announcement would come as a relief for many in rural areas.

“Farmers and landowners have been devastated by the destruction that has been caused by this flooding and it is vital that the money is made available quickly and easily.”

The government has faced fierce criticism for its slow response to the flooding aftermath.

When he visited Stainforth, South Yorkshire, on Wednesday (13 November), prime minister Boris Johnson was heckled by locals. One told him: “You took your time, Boris.”

Thousands of acres of farmland remain under water in South Yorkshire, Lincolnshire, Nottinghamshire and other parts of the Midlands.

The floodwaters are receding, but with more heavy rain forecast for Thursday (14 November), locals fear there is more flooding to come.

The village of Fishlake, near Doncaster, has been marooned and locals fear they will not be able to get back in their properties for at least three weeks.

About 500 properties have been flooded in Doncaster and a further 1,200 evacuated in flood-hit areas.

The government defended its response to the floods, saying about 14,400 properties have been protected by flood defences, including nearly 5,000 properties in South Yorkshire alone.

Are you a farmer affected by the recent floods? Email your pictures and stories to philip.case@proagrica.com or via Twitter @PhilipCaseFW