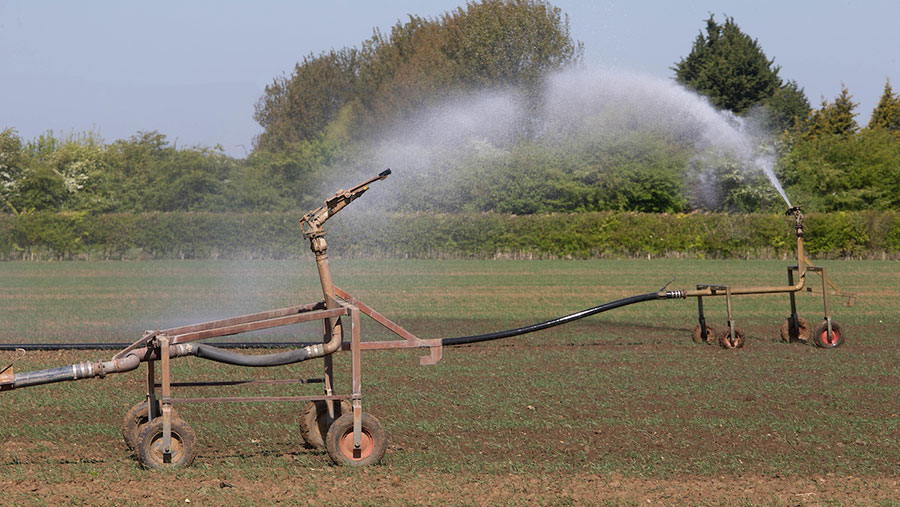 Growers are being told to expect further dry conditions over the next fortnight as the unusually dry spring looks set to continue.

Cereal crops across large swathes of the country are showing signs of drought-stress – and they are in desperate need of rain over the next two to three weeks.

After a washout autumn in which many farmers struggled to get their crops in the ground, the UK has been experiencing one of the driest springs in recent years.

April was the sunniest on record in the UK and also one of the top three driest, according to the Met Office.

Farmers who failed to drill their winter cereals in the autumn, but did manage to drill their crops in the spring have already suffered about a 25% financial hit.

Spring-sown crops are now in need of significant rainfall. But there is a glimmer of hope for growers as the Met Office says there is a possibility of some heavy rain showers in the South East.

Cooler, unsettled weather is forecast for Friday (22 May), with rain pushing across the UK. Showers are expected mainly for northern and western regions.

However, there are signs that more settled conditions will develop across the South through the latter half of the weekend and extend to other areas through next week.

Andrew Blenkiron, estate director of the 4,289ha Euston Estate near Thetford, on the Suffolk-Norfolk border, said 30mm of rainfall at the beginning of May freshened up the crops. But it’s been dry since.

“If this dry spell continues for a couple of weeks, our cereal yields will be quite dramatically affected,” said Mr Blenkiron, a Farmers Weekly Farmer Focus Arable writer.

“Tiller death has been quite dramatic this last week. All the second tillers are dying back in the plants and they are heading back to their main stems.

“The big danger is if we get too much rain late on and you get secondary tillering.

“You could get a crop of two harvests – wheat or barley ready in July with all the greens in it.

“Immature greens in the sample have caused problems in recent years.”

The farm does not grow spring crops because they are difficult to establish on the light Breckland soils.

He said winter barley crops were showing about 70% of their full potential and the winter wheats 80%. Mr Blenkiron has invested £700,000 in two farm reservoirs to combat a succession of dry spells over the past decade.

The water is used to irrigate some 567ha of root crops. For the first time this year, Mr Blenkiron decided to water sugar beet crops.

“There were two fields that might have had a bit of agrochemical scorch.

“We thought we’d give them a bit of water,” he explained.

Some stored water on the farm has also been sold to neighbours to irrigate parched cereal crops. The estate is also growing 647ha of maize destined for an AD plant.

“The maize looks OK at the moment, but it will need some rain soon,” he added.

Mr Blenkiron said the third dry spring in a row at the Euston Estate had only served to highlight the importance of the Basic Payment to his farming business, especially during volatile growing seasons.

Wiltshire farmer David Butler said he counted himself lucky as his farm did manage to catch some of heavy showers earlier this month.

Mr Butler, who farms at East Wick Farm just south of Marlborough, and is a Farmers Weekly Farmer Focus Arable writer, said his winter cropping is looking better than his spring cropping.

“Back in the autumn, the conditions were awful and we were putting crops in in sub-standard conditions. I’m very pleased that my team pushed on,” he said.

“I think the autumn cropping is dealing with the conditions better than the spring cropping.

“Spring barley could be really drought-stressed, whereas the winter barley is looking fairly healthy.”

But on a scale one to 10 (with 10 the highest), Mr Butler said his concern about the dry weather is now 10.

“We need to have some rain in the next fortnight. It’s a growing concern,” he added.

“The futures markets have shot up for oilseed rape. There’s a realisation in the markets that the dry weather is a developing issue.”

The Butlers also run a 300-head dairy with 300 followers plus 160 beef. At the moment, they have a lot of maize over from last year, but they are delaying selling it in case the dry spell continues and they are left short of fodder.

“We may have to wholecrop some cereals if we get stuck,” said Mr Butler.

Lincolnshire grower Tim Braithwaite drilled about 32ha of spring barley on his arable farm near Lincoln – and he is still waiting for about 30% of the crop to germinate.

“There’s simply not enough moisture around and I don’t hold out much hope for any as there’s no rain forecast.”

Mr Braithwaite said applying granular fertiliser this season has also been very challenging and costly as it has just been sat on the surface waiting to be washed in – but the rains haven’t come.

He added: “We have gone from one extreme to the other this season – soaking wet to bone dry.”

It has been wetter in Wales, Scotland and Northern Ireland than in England this spring, although many areas have recorded rainfall levels well below average.