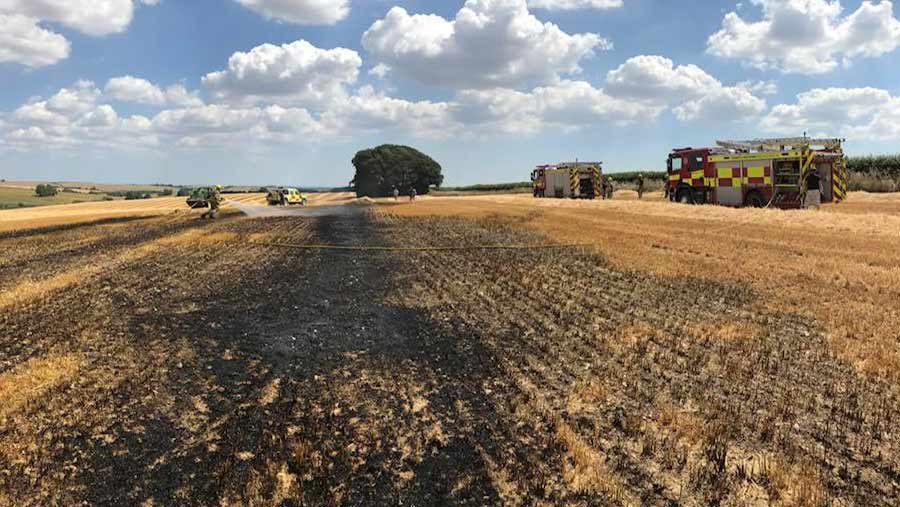 The sustained dry weather shows no sign of abating and farm fires have been reported across the length and breadth of the UK.

Combine and baler fires have been reported in the West Country, East Anglia and the south east of England.

Major blazes continue to burn on open heath and moorland, and concerns are growing the situation could become much worse as heavy machinery and equipment starts harvest work in parched crops.

Pushed to the limit

Rural insurer NFU Mutual warned there was always a risk of fire on farms but harvest made it greater as machinery which had been standing idle was suddenly pushed to its limits.

Rural affairs spokesman Tim Price said harvest 2018 conditions were “extreme and in some regions even drier than the fabled summer of 1976”.

“It means many people will not have experienced this before and won’t fully appreciate how dangerous the situation is.

“But the risk of sparking a fire that quickly spreads across large tracts of land is now at a critical level,” Mr Price said.

“Sparks, friction or the smallest naked flame from a single match could be all that it takes to start a devastating inferno.

“Even overheating in balers or combines should prompt an urgent and immediate shutdown,” he stressed.

Mr Price added the message must be made clear to all staff.

“Harvest time sees a lot of extra labour on farms, many from overseas who may have a language barrier.

“It is vital that the message to take extra care is pressed home and understood by everyone,” he said.

The NFU has published advice on reducing the risk and information on what to do if fire breaks out.

What to do if a fire breaks out

Eight fire crews tackled a large field fire at Mapperton Farm near Winterbourne Zelston on 8 July. Firefighters reported the blaze spread rapidly to cover an area of 500m by 500m which needed 10 hose reel jets, a mainline and beaters.

Firefighters tackled 60t of burning straw as fire swept across 6ha of stubble.

Four fire engines were sent to Stroud Farm near Maidenhead who tackled the blaze for more than 15 hours on 3 July.

A 10ha field of standing barley caught light at Chiverton Farm near Kenton on 8 July. Devon and Somerset Fire and Rescue Service brought the blaze under control with four fire engines, a 4×4 vehicle and water tanker along with a bowser from a nearby farm.

A small herd of cows was evacuated at a country park farm as fire ripped through their housing on 8 July. West Midlands fire service used two fire engines and eight firefighters to battle the blaze.

A wildfire broke out across 20ha of farmed land near Golspie in Scotland on Saturday 7 July.

Firefighters tackled the flames throughout Sunday and nearby farms were warned to stay indoors as the ash and soot was blown by strong winds.