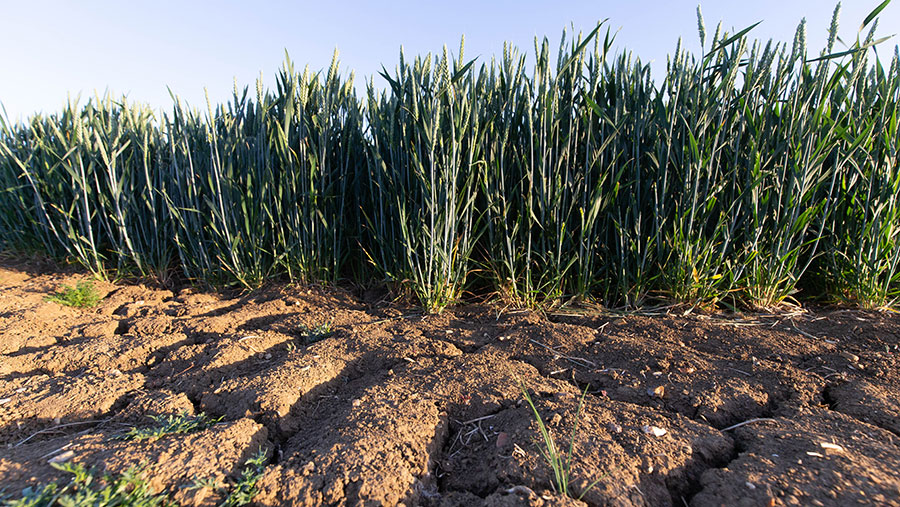 An unsettled spell of weather forecast for the UK over the next 10 days is set to offer relief for parched crops after the sunniest spring on record – which could make or break harvest for growers.

According to Met Office data, May 2020 was the driest on record in England and second driest in Wales, with an average of 9.3mm and 14.3mm of rainfall, respectively – equivalent to just 17% of the average for May.

May 2020 was also the sunniest calendar month on record, with 266 hours of sunshine, surpassing the previous record of 265 hours in June 1957.

Meteorologists said the dry spring was even more extraordinary following the wet autumn and the wettest February on record.

NFU deputy president Stuart Roberts said many farmers were feeling the effects of a dry April and May and some cereal crops were already suffering from this early dry spell.

“With irrigators working flat out across the country, and in addition to the significant disruption caused by Covid-19, it could shape up to be an extremely challenging season for farmers and growers,” he added.

“Farmers are closely following predictions of hot, dry spells in the weeks ahead and what this could mean for water availability, especially with livestock now turned out to graze and harvest not far away.” 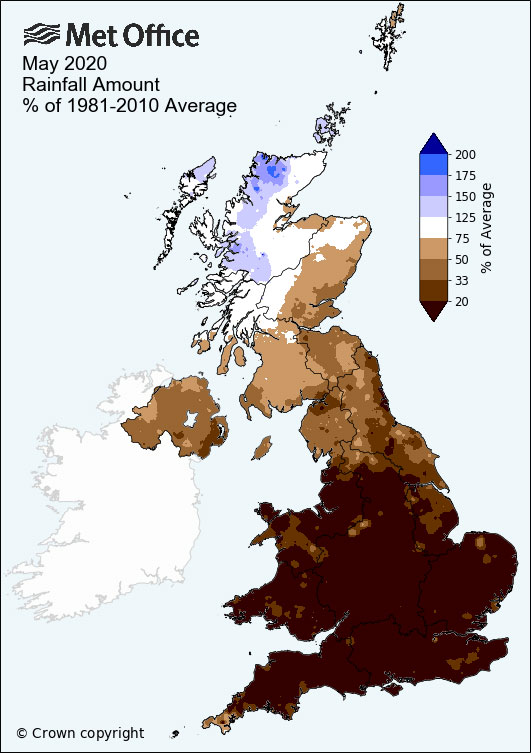 Many arable farmers have reported being desperate for rain and they have warned that unless there is a significant spell of rainfall over the next fortnight, crop yields could be hit by 30-40% this harvest.

Rob Gardner, farm manager at Manor Farm, in Upton Grey, a village near Basingstoke, Hampshire, said: “I think rain now could be worth an extra £100,000 to our 1,000 acres.

“It could be the difference between 8t/ha and 10-12t/ha for wheat yields. Overall, rain could make a 40% difference on yields across everything. It doesn’t have to be much – an inch or two of rain before harvest would sort us out.”

However, the latest Adas report into UK crops conditions in mid-May estimated 26% of winter wheat is rated “poor” or “very poor”, meaning yields are very likely to be below average.

The condition of the domestic barley crop has also declined since the previous report released in March. Now 27% of winter barley is in “poor” or “very poor” condition.

The spring barley crop, which saw large increases in area planted this season following the wet autumn, was rated “poor” or “very poor” for 13% of the total area – up 10% from last year.

An estimated 41% of the winter oilseed rape crop is rated in the “poor” or “very poor” categories. For spring OSR, this figure is estimated at 40%.

But the weather forecast for the next 10-14 days does offer some hope of a recovery for growers.

Rain in the far North West is forecast to “sink south” on Tuesday (2 June), with the odd downpour possible, most likely in south and east Scotland, followed by a sharp downturn in temperatures.

Further rain is expected on Wednesday (3 June), with possible localised downpours and thunderstorms across southern England and south Wales.

Persistent rain is forecast for many areas on Thursday (4 June), clearing south-east England, followed by sunshine and showers for most on Friday and Saturday (5-6 June).

Sunny spells and showers are likely to develop across many parts from the weekend onwards before a return to longer drier, brighter spells could towards mid-June, especially across northern and western areas.

Visit our Know How page for the latest weekly weather forecast video with WeatherQuest.