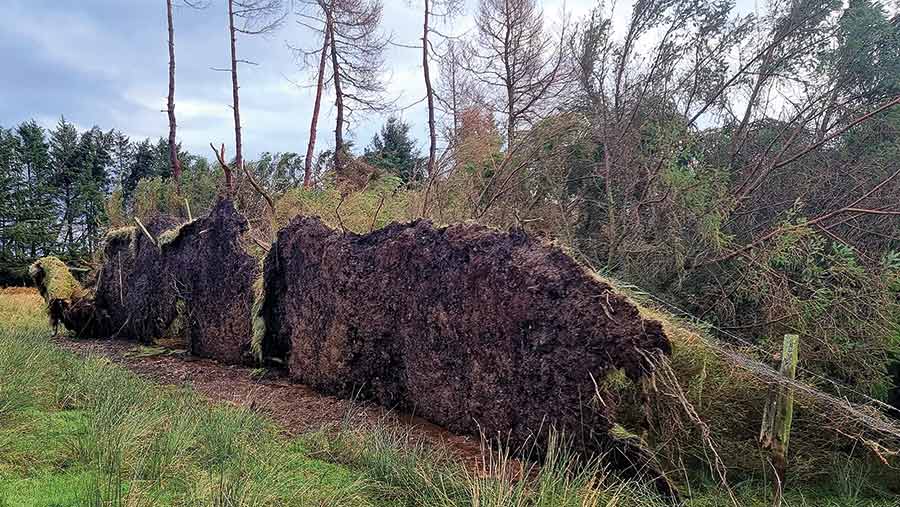 The government must develop an emergency fund to help farms and rural businesses in northern England and Scotland bounce back quickly from storms Arwen and Barra, farm leaders have insisted.

Both the NFU and the Country Land and Business Association (CLA) said the UK government must now consider introducing an emergency recovery scheme such as those created in the aftermath of serious flooding events.

Storm Barra, the second severe winter storm this season, brought gales and blizzards across much of the North in the wake of 98mph Storm Arwen, which battered farms 10 days earlier.

Many farms were recovering from the damage and power cuts caused by Arwen when Barra blasted into Britain from the Atlantic, with 80mph winds recorded on Tuesday 7 December.

Thousands of homes have been left without power in many small villages, with an enormous toll placed on businesses through damaged buildings and lost earnings. Some farms have reported losing as many as 1,000 trees.

The NFU said it had received widespread reports of catastrophic damage on farms caused by the storms, especially Arwen, which had left a trail of destruction in much of Scotland and in northern England.

He described the damage he witnessed at Prendwick Farm (pictured), run by Jamie Wood, as “very significant”.

“Every single one of the five woodland shelter belts was pretty much flat. I’ve never seen so many trees snapped off halfway up the trunk,” said Mr Roberts.

“The falling trees had ripped up about 12km of fencing. One building had taken off out of the yard and blown 200m into a field down the way. They were left without power for a week.”

But farmers were doing an “unbelievable job” clearing fallen trees from blocked roads.

Mr Roberts said it would take some farms many months, if not years, to recover from the damage.

CLA president Mark Tufnell said the government’s poor response to Storm Arwen highlighted that no progress had been made in levelling up the country.

“The impact on rural communities in the north of England is every bit as severe as the South East suffered in 1987 – but with only a fraction of the government support and public interest,” he said.

Mr Tufnell claimed the government had “taken a back seat, passed the buck to energy companies and walked away”.

Military personnel were eventually drafted in to help the recovery effort from Storm Arwen in Northumberland and Scotland after a delay.

“Rural communities cannot be forgotten about, yet again, in their time of need,” insisted Mr Tufnell.

NFU Mutual has received more than 5,600 claims from farming, commercial and personal insurance customers for damage from Storm Arwen, especially in Scotland and northern England.

Types of claims range from significant structural damage to farm buildings, with roofs blown off and collapsed walls, damage to roof tiles and loss of refrigeration due to power cuts.

A UK government spokesperson said: “Power has now been restored in homes affected by Storms Arwen and Barra, but we understand this has been a deeply distressing time for people in rural areas who have faced disruption.

“We are grateful for the tireless efforts of engineers, volunteers, Armed Forces personnel and emergency responders on the ground who worked so hard to restore power and help those affected.

“The government has launched a review into how energy operators responded to Storm Arwen to improve the resilience of electricity networks in Great Britain, and we welcome Ofgem’s related review to consider if appropriate enforcement action should be taken against energy network operators.

“The business secretary has written to network companies setting expectations to deliver compensation to affected customers without delay.”

Sheep and beef tenant farmer James Drummond said a combination of the strong winds from Storm Arwen and heavy rain from Storm Barra created a mess that will take at least the winter to clean up.

“I’ve never seen anything like Storm Arwen before. It flattened entire woods,” said Mr Drummond, who was without power for 10 days at Leamington Hill Head, in Alnwick, Northumberland.

“The damage caused by falling trees, whether by trunks and branches or by roots lifting fences if they’ve fallen away from the fence, will take us weeks to sort out.

“Some farms have been worse hit than us and I imagine they’ll need the rest of the winter to rectify the damage.”

With the days now short and fields soaking, he will try to travel on ground to chop trees and repair fences when there is a hard frost. But he fears he may make a mess trying to get fields stock-proofed before lambing.