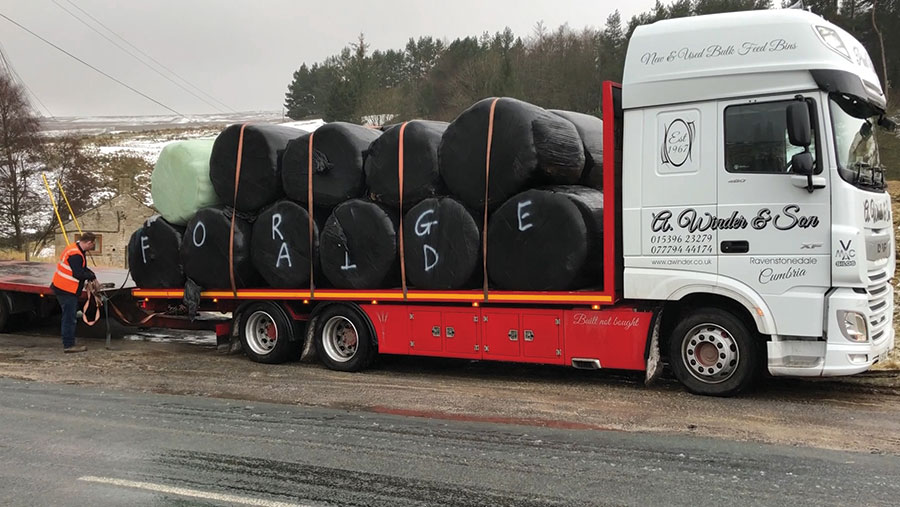 In addition, there was huge damage to the yard and the land.

In just three hours 340mm of rain fell, turning a stream into a powerful torrent which dumped 10,000t of stone on the field nearest the yard and far more in the yard itself.

Boulders carried by the stream stacked up against a building, forcing the water through the yard, taking with it stone walls and washing away the single track road that runs past the farm.

CCTV caught the torrent carrying bales past its doors and Mr Barningham’s daughter’s horse swimming as the water rose close to the top of the breeze block walls.

Incredibly, the horse managed to clamber out of the building, but his son’s car was lost in the floods.

Mr Barningham is waiting for a payment from the government’s Flood Recovery Fund, although the maximum grant of £25,000 will go nowhere near covering the damage.

Forage Aid has supplied more than 200 bales of silage and haylage to Home Farm.

“We’ve had tremendous help from Forage Aid and from many local farmers and the young farmers,” he said.

“Everyone’s been so helpful, it’s helped us get through a really tough period.”

Where to go for help

Forage Aid stepped in to help with this, too, as it has done on other farms, removing about 700 bales in total and delivering them to an AD plant further north.

His sheep carcasses were found as far as five miles downstream and the costs for the carcass disposal fell to Mr Barningham to pay.

This year, the recovery will continue, with a lot of walling work planned.

A load was also delivered to Ron Bailey, who farms a few miles away at Fremington Mill Farm, Fremington.

Forage Aid is growing all the time, thanks to the support and goodwill of the wider farming community.

However, it is currently working hand to mouth, said founder Andrew Ward.

It has delivered more than 500 loads to hundreds of farmers since 2013.

“We’re still looking for silage, another load or two would help,” he said.

The organisation is part of the farming help group, supported by the Prince’s Countryside Fund.

Mr Ward founded it in 2013, when snowstorms left farmers in Wales and north-west England without feed.

Helping with the impact of the summer floods last year and those in early November, it has moved another 30 loads worth £48,000 and there are five more to schedule.

About 85 hauliers, many of them owner-drivers, have given their time and trucks free  of charge to make the deliveries.