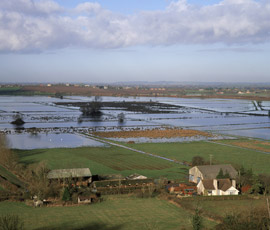 Farmers are being warned to prepare for further flooding as more wet weather is predicted this week.

The Environment Agency said more heavy rainfall is forecast for the next few days, with Devon, Somerset and south-east Wales at serious risk of flooding.

The continuing wet weather is creating havoc for farmers with many unable to access saturated fields to work.

Dairy farmers have had to keep cattle under cover most days since the autumn and waterlogged fields are preventing slurry spreading.

Somerset dairy farmer Barrie Bryer said half his farm has been under water for almost a year, including 40 acres of land that he has been unable to access.

“The ground is saturated and there is nowhere for the water to go,” said Mr Bryer, of Charity Farm, in Bere Aller, Langport.

“The river (Parrett) needs dredging and the Environment Agency accepted that this week. We’re hoping something can be done.

“We have got 160 bales, which were baled on 7 September. But they are still out in the fields – we haven’t been able to get near them.”

His herd of 100 Friesian cows and 80 followers has mostly been kept indoors since the summer and they have not been out to graze.

Mr Bryer used up all his forage reserves during the summer and has sold off a few cows to ensure enough supply for the rest of his herd.

“I’ve been farming here for 30 years and I’ve never seen anything like this. I’m scraping through, but we’re better off than some,” he said.

“They are having to keep animals in longer and buy in fodder. The price of feed has gone through the roof. It’s a vicious circle,” he added.

“Farmers cannot get on the ground to do anything, or get crops in the ground. For most, it’s been the worst year in living memory.”

Met Office forecaster Charlie Powell said the unsettled weather looked set to continue for the next fortnight, with a mixture of rain, drier spells and below average temperatures.

“In terms of farming, it’s going to be difficult to get any substantial amount of work done, especially in the South West where even small amounts of rainfall can cause problems due to the legacy of wet weather,” he added.

Add your views to our Flooding forum