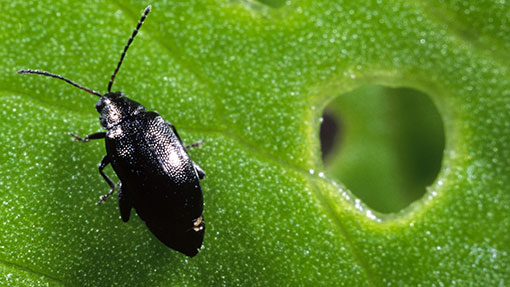 Defra was asked 10 weeks ago to grant emergency permission for two agrochemicals that could have helped growers stave off a flea beetle epidemic this autumn, it has emerged.

The NFU supported two requests to the Chemicals Regulation Directorate for the agrochemicals to be used against flea beetle. But a decision has yet to be announced.

NFU vice-president Guy Smith said: “We supported emergency applications to use non-banned neonicotinoid chemistry in the autumn for flea beetle and aphid control. Those applications were submitted in July.”

Mr Smith said he had been told time and again by government officials that a decision was imminent. But an announcement had still not been made. “We are getting fed up. It seems like the request is being sat on and it would be useful to know why there has been such a delay.”

A flea beetle epidemic has seen some growers forced to redrill half their OSR this autumn. The situation has been exacerbated by a two-year European Union ban on neonicotinoid seed treatments over fears the chemicals damage pollinator populations.

The NFU disputes the assertion that the chemicals harm bees. It argues that the EU neonicotinoid ban is based on unsound science.

When regulators made decisions about banning pesticides, they should consider the effect that a ban would have, said Mr Smith. “It is quite clear they had no idea of the impact the neonic ban would have.”

A Defra spokesman said: “We are considering two applications for pesticide authorisations in accordance with EU rules but cannot comment further.