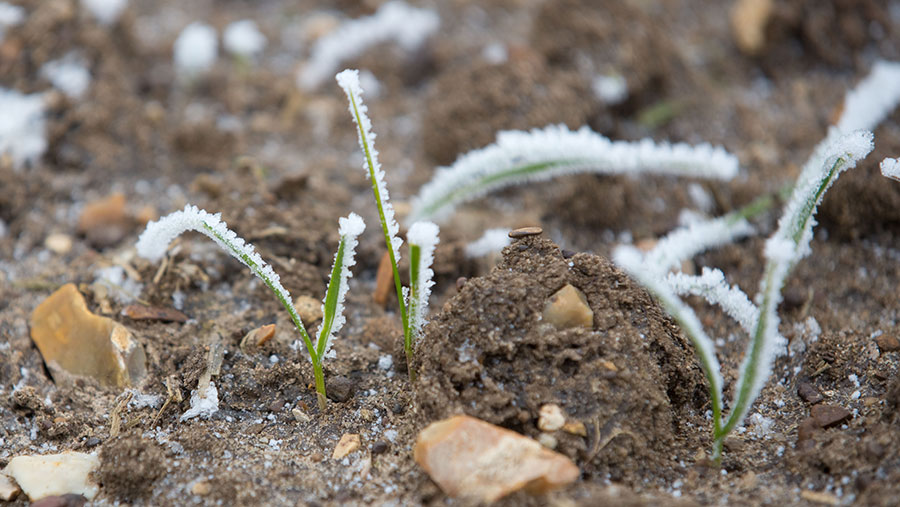 Growers and agronomists took to Twitter to air their pleasure that winter has arrived, ushering in a spell of harsh frosts and sub-zero temperatures across many parts of the UK.

The bitter conditions are in stark contrast to last December, which was officially the warmest on record with an average temperature of 8C for the month.

The hope is that the cold blast will hold back the spread of crop diseases, such as yellow rust, and deter pests.

We’ve cherry-picked our favourite winter weather farming tweets to capture the mood of arable farmers across the country.

3 nights in a row of below -5, almost unheard of for down here @MRH_Agronomy @AgriiWest pic.twitter.com/2ntl9sJ4Ro

Beautiful frost this am. Should help with a few unwanted pests #winter16 pic.twitter.com/3qpbQ09PBX

Osr getting knocked back by frost and pigeon patrol started already pic.twitter.com/BzFCLYOIJH

Sammy took advantage of the frost this morning and made a top job of ploughing the beet pad area. pic.twitter.com/E74l5oRw5w

Re-drilling sprayed off area on the frost this morning. pic.twitter.com/x0NpzgYQOW

Up and at it this morning, making the most of the frost ❄️ pic.twitter.com/5hX4fNj30a

Finally got on the kerb today in the cold #compass and #Elgar looking a mixed bag. Spirit not even marking ground @HOUSEHAMSPRAYER pic.twitter.com/gnExkH078n