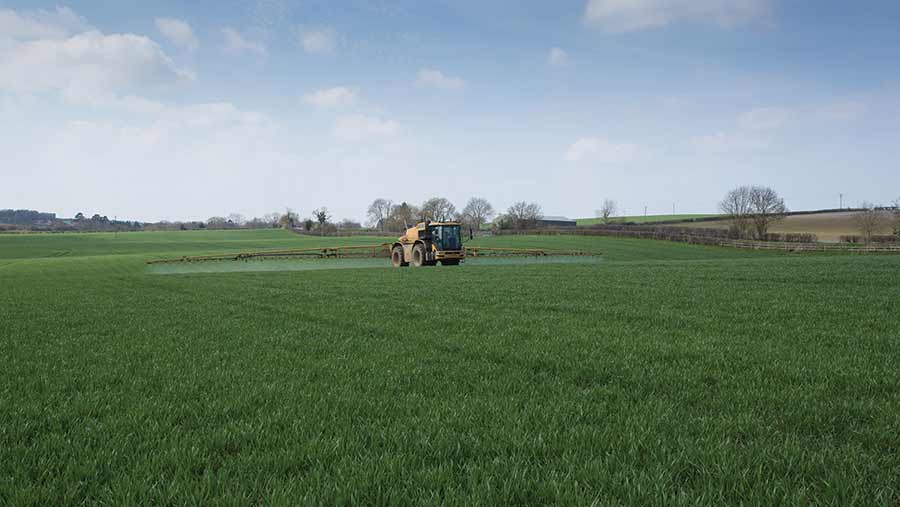 Last year, a mild winter struck fear into the hearts of many wheat growers as experts predicted 2015 could beat 2014 as the worst septoria year on record.

Now growers are again looking at their crops with trepidation as high disease pressure takes hold, but data showing why 2015 turned out to be relatively disease free could give them hope for 2016.

When comparing the data with the five-year mean, it is evident how the septoria disease epidemic was stopped in its tracks and why a repeat of 2014 never materialised.

“There were a couple of key periods – one between growth stage 30 and 32 and the other the five weeks after growth stage 39 – where the rainfall was below the five-year average each week,” explains Mr Bubb.

He also examined temperature before, during and after the T2 flag leaf fungicide timing where, for a time, every day was below the five-year mean.

“The combined cooler and drier conditions experienced through those periods clearly slowed down the spread and cycling of the septoria,” he adds.

Many growers will be hoping for a repeat of these cool and dry spells once crops begin to move, with septoria, rusts and mildew already widespread.

The Crop Doctor helicopter will be taking to the skies once again in April and May to get a snapshot of regional wheat disease pressure. Independent and Bayer experts will provide Farmers Weekly readers with the latest advice on disease control ahead of the critical T1 and T2 fungicide spray timings.

However, without accurate weather and disease forecasting, growers can only know it is going to be a high or low disease year when it is too late to react by beefing up or trimming back sprays.

With many growers looking for cost savings in a period of depressed wheat prices, Mr Bubb warns strongly against missing a T0 spray for that reason and sees it as a valuable risk-management tool.

“The curative efficacy of chemistry is slipping against septoria and pushing the programme into a protectant mode. A T0 reduces the disease burden and gives flexibility if things slip at the T1 timing,” explains Mr Bubb.

He remains unconvinced a pre-T0 is justified unless rust is severe, in which case a specific rust-active product might be necessary.

“I haven’t seen the benefits for septoria, but a chorothalonil-based T0 is imperative and it shouldn’t be applied until three to four weeks before the T1 timing.”

Adas fungicide expert Jonathan Blake points out there is little positive yield benefit from a T0 in trials for controlling septoria, but it is a different story for rusts.

With yellow and brown rust widely reported in susceptible varieties and news that a new race of yellow rust (see p46) is present in the UK, both diseases could be problematic.

He says in these situations, the technical merit of a T0 fungicide prevails, helping to stem or delay an epidemic that can be uncontrollable with later sprays.

“A strobilurin may be a good option, rather than loading programmes with azoles and selecting for septoria insensitivity, but where yellow rust is established, I’d include an azole such as epoxiconazole, tebuconazole or cyproconazole, as they tend to be more active,” says Mr Blake.

Mr Blake says last year’s trials couldn’t separate the value of the T1 and T2. It showed adding an SDHI at the earlier timing improved yields by a significant 0.2-0.5t/ha.

“This was on susceptible varieties in the West, where it is likely to be required, but the yield response was less in the East and therefore would have provided less benefit.”

Mr Blake adds that an azole plus chlorothalonil was sufficient last year in the East on more septoria-resistant varieties, so if conditions allow, that is where growers may be able to cut back.

“You would hope in the East – where septoria is less prevalent – there is a smaller need for two SDHIs, which helps manage resistance and contributes to the survival of the chemistry.”

Mr Bubb agrees there may be situations for leaving out an SDHI T1, particularly in later-drilled wheats in the East, with prothioconazole plus chlorothalonil a viable option.

“But you need to be absolutely spot-on with timings. You are saving about £6-£8t/ha and over a large area that can be significant, but it comes with a risk. Don’t drop rates and use the right dose.”