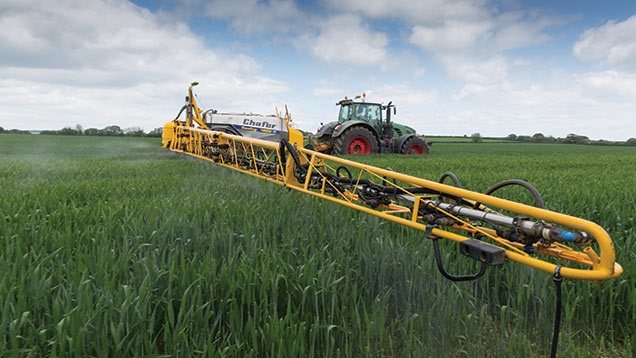 Reducing spray drift by up to 90% is just one of many things growers in the UK could learn from their Dutch neighbours.

Britain and the Netherlands might only be separated by 150 miles of North Sea, but the contrasts in arable farming are stark.

The Dutch are blessed with 4.15m hectares of flat and fertile land, 58% of which is used to grow arable and horticultural crops.

Based in Lorbaan in the south-eastern corner of the country, Timmermans Agri-Services specialises in contract spraying and fertiliser application.

The contractor’s work spans 5,000ha in the Netherlands and into neighbouring Germany.

Harm Timmermans started the business 25 years ago. He tells Farmers Weekly that all growers must take stringent precautions to avoid water pollution.

“If we are near water then a 5m buffer is required, but we can go down to as little as 75cm depending on the crop and the product label,” he says.

His fleet of eight Agrifac sprayers are equipped with air jet twin fluid nozzles and a border nozzle at each end of 42m booms. The contractor also now has a 45m sprayer at its disposal, again an Agrifac machine.

“We like them because they are very comfortable and high tech, but sometimes the technology can be too much. The nozzles we use are very expensive, but they are the best quality,” he says.

Jan Vandezande is leading spray drift research at Wageningen University, 45 miles north of Timmermans’ base. The team there is researching causes of spray drift and technical ways of reducing it.

Mr Vandezande explains that continual use of tramlines is one of the biggest causes of spray drift and also risks overdosing or underdosing the crop.

“Spray drift is a big problem in the Netherlands because of all the surface water surrounding crops. The movement of the boom up and down, forwards and backwards as it moves along results in over and under doses,” he says.

He attributes this movement to repeated use of the same tramlines. Although this is a staple practice of most growers globally, it makes the travel bumpier.

Research has shown that boom movement can account for under or overdose of between 30% and 270%, where 100% is the optimum. This means a plant could receive about a third of the recommended dose at one extreme, compared with nearly three times above recommended dose at the other extreme.

In typical Dutch fashion, Mr Vandezande offers a simple solution to the problem of drift reduction.

“Driving along the tramlines but in the opposite direction can help with this, but we found that a spraying speed of 12-15 km/h was best in trials for reducing boom movement, although this was the fastest speed that we tested,” he says.

Perfecting boom height and spray speed will also help growers get their spray drift under control. Wageningen University research has been measuring the length of the spray cloud behind the boom, comparing spray clouds created by a variety of nozzle types, orientations and boom heights.

The experiment saw a sprayer boom pass over a 20m test bench that took an air sample to determine the size of the spray cloud behind the boom. The sprayer was driven at various speeds set at different boom heights.

“Doubling your speed will effectively increase your spray drift by a factor of five,” says Mr Vandezende.

This is why you’ll rarely see a Dutch sprayer operator moving along a crop at more than 7km/h.

“The speed, nozzle type and size and spray pressure all come together to determine the amount of spray drift,” he says.

“People talk about spray drift reduction nozzles, but there is no such thing. You might have the right size and type of nozzle, but a three bar pressure will still increase the amount of drift,” adds Mr Vandezende.

Spraying bare soil with a pre-emergence herbicide often causes the greatest difficulties when trying to keep drift at a low level. There is greater risk of the spray being blown off course either by wind or air displacement.

Tests found that a 50cm boom height is ideal to reduce spray drift in this instance.

Growers are sometimes put off by spray drift reduction techniques because of fears this might hamper spray efficacy. But Mr Vandezende says this is a common misconception.

“Eight years of research into 90% spray drift reduction techniques has shown no reduction in efficacy except on the smallest weeds and onions. To overcome these exceptions, it is best to wait for the second leaf on small weeds and to use a sticker for onions,” he says.

Preventing water pollution from residual spray chemicals is just as important as tackling spray drift and one Dutch farmer has developed a three-stage bio-bed which boasts 98% cleaning efficiency.

Chemical spray residue is pumped from an underground storage tank up to a large vat filled with soil and chopped straw and a small amount of gravel at the bottom for improved drainage.

Farm manager Marc Kroonen says the system is an effective, low-maintenance way of safely getting rid of spray residues.

“We have 10-12 litres of polluted water a day that we need to get rid of somehow. We created this bio-bed which has a very good cleaning capacity of about 98%,” he says.

He notes that it is never possible to achieve 100% efficacy through any method.

The maximum quantity of washings that any bio-bed can treat is 15,000 litres a year.

In the UK more than 40% of all pesticides detected in water come from poor practice during sprayer filling and washing.

Look after your soils to lock in yields

Farming soils that are prone to drought and erosion makes increasing organic matter a primary objective for Mr Kroonen.

About 110ha of the farm is dedicated to arable farming research and is one of four farms linked with Wageningen University.

However, most of the land is conventionally farmed, growing potatoes, sugar beet, spring and winter barley, peas and maize on a four-year crop rotation. Leeks, asparagus, strawberries and tulips are also grown.

Mr Kroonen explains that Dutch land is intensively farmed because of its fertility, but growers shouldn’t take this for granted.

“Soil health is a big topic in this country, especially on sandy soils such as ours and we must keep control of our nematodes,” he says.

We are also susceptible to drought and soil erosion here so we always aim for organic matter to be between 3% and 5% on our sandy soils to help stop that happening,” adds Mr Kroonen.

A mix of mainly compost, cattle manure, green waste and chopped straw is spread on the land at 2.5t/ha each year to keep organic matter at the required level, helping to sustain long-term yields.

“I think soil organic matter offers a solution in terms of soil structure and it feeds the bacteria to get a balance of good and bad nematodes. We retain more minerals and nitrogen with higher levels of organic matter,” he says.

However, current land prices in the Netherlands are about £35,000-50,000/ha, meaning some farmers want to see a quick return on their money by reducing soil-care costs.

“This is short sighted and we think more cereals should be grown here because although they might be worth less, they are better for the soils long term,” adds Mr Kroonen.

Timmermans Agri-Services has offered a soil scanning service to growers for the past nine years, something that has become a popular option for many growers in the country.

“We farm intensively and this is a problem for our soils. I think in future we must use fewer chemicals and there’s a lot of government pressure to do this,” says Mr Timmermans.

“Soil samples are important and growers pay us to have their fields scanned for pH levels, potassium, nitrogen and calcium. For potatoes we soil scan at 5-6m intervals because it is a high- value crop,” he adds.

Close attention is also paid to phosphate levels as Dutch farms can be subject to phosphate vulnerable zones. The collected data is mapped and used for variable-rate fertiliser applications.

Land in the Netherlands sometimes suffers from a low pH and must be brought up to at least 5.4pH, with an aim of hitting a 5.7pH target.

To get the balance right lime calcium is applied, after which it takes about a week for soil pH to react.

Although nitrogen sensors are fitted to most of his sprayers, and variable-rate fertiliser applications are popular, Mr Timmermans says he draws the line at variable-rate spraying because he forecasts a decline in future spray use.

“I don’t see this happening over here because sometimes the costs are greater than the potential benefits. As a contractor, when you do extra the costs naturally increase but the growers won’t pay. I see less sprays being used in the future.”