CF Fertilisers is the UK’s only manufacturer of Ammonium Nitrate (AN) fertiliser and offers a range of products with a proven track record for grassland and arable applications.

CF blue bags are a regular sight on farms up and down the country helping farmers to grow better crops.

With names like Nitram, DoubleTop, SingleTop and Heartland Sulphur very much part of modern farming systems, these products are focused on maximising Nitrogen Fertiliser Use Efficiency (NfUE)

R&D is an essential element of the CF philosophy, the company is focused on delivering the highest levels of cost-effectiveness and performance on-farm whilst meeting increasingly demanding environmental needs.

With the UK clean air strategy (2018) highlighting the benefits of moving away from straight urea as an N source combined with the need to optimise Nitrogen Fertiliser Use Efficiency (NfUE), many growers are now facing stark choices over their future fertiliser choice and management.

Reducing ammonia emissions and improving overall production economics generally, is a challenge for all arable producers.

With spring periods of variable weather conditions becoming more common and opportunities for completing fieldwork increasingly limited, many producers are now re-evaluating product choice with continuing use of liquid fertilisers under particular scrutiny and a switch back to solid fertilisers is evident.

1. Higher yields and quality with solid AN

In the UK climate, 125 industry trials concluded that liquid UAN fertilisers yield less than solid AN fertilisers. This was on average 0.3t/ha less – the equivalent of nearly 750 tonnes of production over 5 years on a typical 500ha farm.

An AHDB review has confirmed this, showing that liquid UAN yields on average 0.1 to 0.4t/ha less than solid AN at the same application rate.

Current thinking is UAN used earlier in the spring negatively affects biochemical processes within the plant leading to poorer yields and grain quality compared to crops receiving a solid equivalent.

In addition, some milling wheat contracts require all crops to use solid N to ensure true protein is measured in the crop at harvest without potential false readings from a coating of foliar N if applied later in the season.

Farm trials applying a Nitram (34.5%N), DoubleTop (27% N 30SO3) system have shown high yielding wheat crops can increase grain N by 2% with a late application (early June) of AN with milling specs being consistently achieved.

2. Lower costs with solid AN

Over the last three years Nitram prices have saved growers 12% on costs over liquid UAN in terms of p/kg N.

UK government studies proved that losses of Ammonia N to the atmosphere are on average just 3% with AN, compared to 14% with liquid UAN.

Overall, this means much of the paid-for N is lost to the atmosphere with liquid UAN which is detrimental to both production economics and environment.

If the costs of damage caused to the sprayer from highly corrosive liquid N, lower resale value and additional finance costs of more expensive equipment are considered, then liquid N becomes an even higher cost option than solid AN.

3. Less pressure on sprayer at critical time of year

Applying the same amount of N from liquid UAN takes longer than with solid AN which is a real problem in modern production systems.

Furthermore, increasingly variable growing conditions are resulting in narrower windows of opportunity for fieldwork so when a gap is created, the workload is increased and the dilemma over which operation to prioritise becomes difficult.

Relying on sprayer equipment to carry out both agrochemical and fertiliser applications inevitably causes bottlenecks during critical periods in the spring.

This compromises timings, yet years of evidence confirm crops respond to Nitrogen best when they need it at key stages in their development, rather than when an operator has time to apply it.

A centrally located large trailer means just one man can keep the fertiliser spreader busy most of the day. 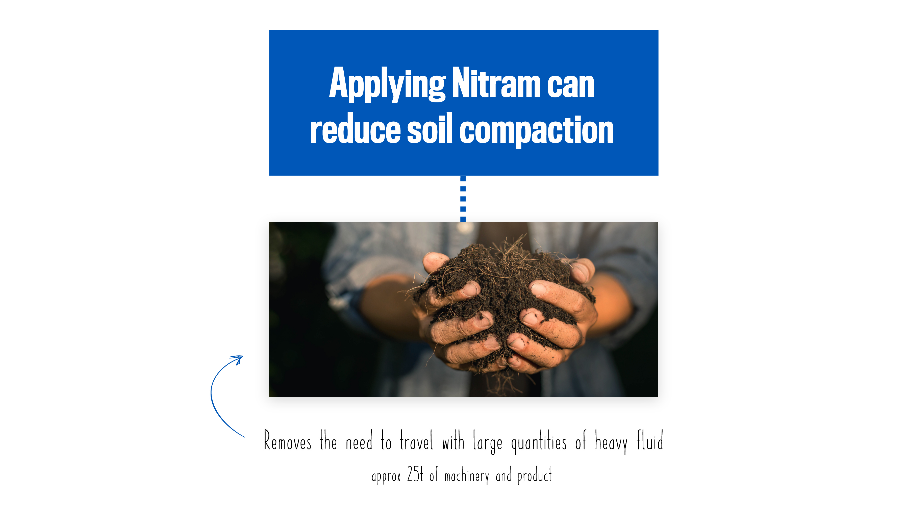 Increased damage to soil structure is an additional reality from a liquid fertiliser system with even a modest reduction in soil structure reducing average wheat yields by 1.0t/ha.

Narrower working windows inevitably mean growers might choose to travel on land when it is not suitable, even in good conditions liquid fertiliser applications can be challenging to soils, with combined equipment and contents reaching 25 tonnes.

According to Professor Dick Godwin of Harper Adams University, a simple increase in soil density from 1.35t/m3 to 1.50t/m3 has been shown to reduce crop yields by 10 – 15%.

This is in addition to significantly more tillage energy and fuel being required to break the soil down subsequently.

Furthermore, air and water infiltration rates are vastly reduced and this impacts significantly on the biological and chemical productivity of the soil.

Damage from wheelings from large trailed sprayers can extend several metres underground and the costs of correcting any damage should always be added to the additional costs and yield losses resulting from continued liquid UAN use.

Scorch is an ever present threat with liquid UAN, with historical trials showing a potential 30 – 40% reduction in flag leaf area leading to a depression in yield of 0.24 – 0.5t/ha

Use of solid AN avoids leaf scorch completely on cereal crops whilst there is a high risk when using liquid fertilisers during the spring, especially in periods of dry hot weather.

The greater the volume of liquid N being intercepted by the leaf the higher the risk of scorch occurring.

Inappropriately applied liquid fertiliser can knock out as much yield building leaf area as the worst crop diseases.

“AN addresses the ‘growing concern’ over ammonia losses and urea-based fertilisers.”

“Growers should be aware of possible efficiency variations between N products. For example, an AHDB funded review showed that liquid UAN yielded 0.1 – 0.4t/ha less than solid AN at the same application rate.” 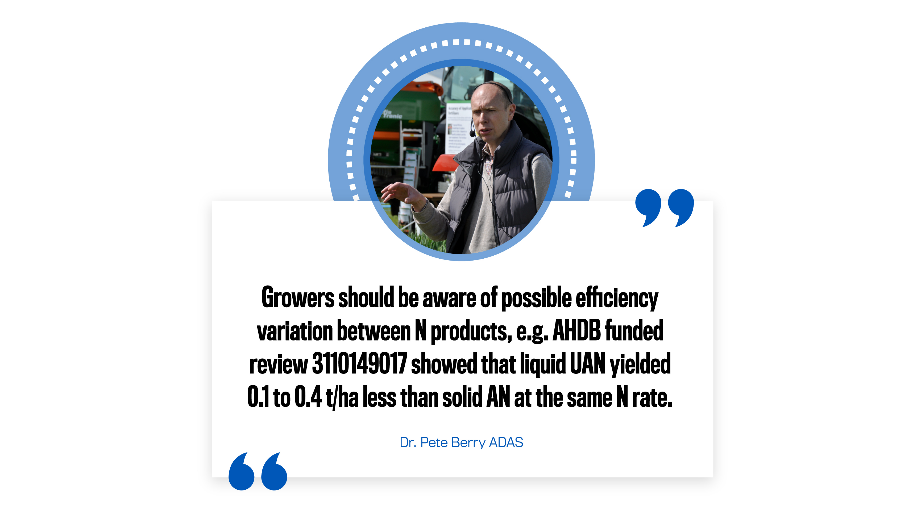 “A simple increase in soil density from 1.35t/m3 to 1.50t/m3 has been shown to reduce crop yields by 10 – 15% in addition to significantly more tillage energy and fuel being required to break the soil apart.”

The facts in numbers

Solid AN over Liquid UAN delivers…